Pennies were only struck for two years (1822 and 1823) and copper proofs + bronzed copper proofs are known to exist for both of these years. In addition, there are the so-called Ionian hybrids (mules) but these are extremely rare. 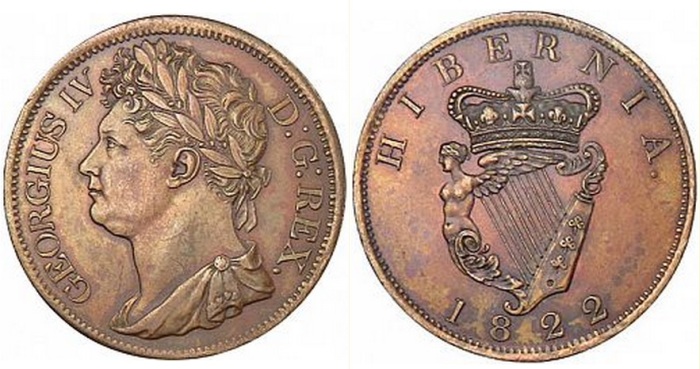 Halfpennies, like the pennies, were only struck for two years (1822 and 1823) and copper proofs are known to exist for both years.

George IV’s Irish farthing did not circulate and, therefore, is not listed in many coin catalogues. As such, it is extremely rare and is only known as a proof / pattern. Examples are seldom offered for sale at auction, or privately.

Who was King George IV ?

George IV, 1762–1830, reigned as King of Great Britain and Ireland from 1820 to 1830.  He was the eldest son and successor to the long-lived George III.  George proved to be a stubborn monarch, often interfering in politics – especially in the matter of Catholic Emancipation which would not have pleased many people in Ireland.  As Prince of Wales, he had a troubled and controversial life :-

The Prince of Wales’ exorbitant lifestyle resulted in high levels of personal debt and his father (King George III) refused to assist him, thereby forcing him to quit Carlton House and live in Mrs Fitzherbert’s residence in Mayfair.

Despite having his debts paid off, plus an additional £10,000 per annum, the Prince’s debts continued to climb and his father refused to aid him unless he married his cousin, Princess Caroline of Brunswick.  In 1795, the Prince of Wales acquiesced.

In constant and open opposition to his father, George associated closely with the Whigs and as a result, when George III had his first serious fit of insanity in 1788–89, the Tory William Pitt proposed that the regency vested in the prince be closely restricted (to prevent George bringing his Whig friends to power).  The Whigs, usually the opponent of royal prerogative, wanted the prince to have unlimited powers as regent.

In 1811, after the King had become permanently incapacitated, George became regent on terms very similar to those proposed by Pitt in 1788.  However, when the limitations on his power to make appointments and spend crown revenues were removed in 1812, the prince regent retained most of his father’s ministers, breaking his connection with the Whigs.  The Tories, under the leadership of the 2nd Earl of Liverpool for most of the period, remained entrenched in power throughout the regency and George’s subsequent reign.

As regent and as King, George was hated for his extravagance and dissolute habits, and he aroused particular hostility by an unsuccessful attempt, immediately after his accession (1820) to the throne, to divorce his long-estranged wife, Caroline.  During his reign the monarchy lost a significant amount of power.  George’s only legitimate child, Charlotte Augusta, married (1816) Prince Leopold of Saxe-Coburg (later Leopold I, King of the Belgians) but died in childbirth in 1817.  George was succeeded by his brother William IV.

Even before meeting Mrs Fitzherbert, the Prince of Wales had notoriously fathered several illegitimate children. His mistresses included :-

The first English king to visit Ireland without an accompanying army was George IV who arrived on August 17, 1821 but he had also come here in 1816 when he was regent. On the same day the press was reporting his arrival at Dunleary, it was also reporting the death of his wife, Queen Caroline.

Although George IV would be remembered as one of the less popular kings by the English, he received a warm welcome in Dublin. Although George IV was a staunch opponent of Catholic emancipation, he reluctantly allowed it to pass when the Duke of Wellington (his Prime Minister at the time) threatened to resign if he did not sign the bill.

Before the king left Dunleary, which was renamed Kingstown in his honour, Daniel O’Connell presented him with a laurel crown and is quoted as saying “He’s a real king, and asks us how we are.”

Another footnote in the historical geography of Ireland is that ‘the straight road from Dublin to Slane’ was supposedly built to allow a straight run for his highness to see his new lover the Marchioness of Conyngham.

George IV, apparently, made quite an impression on the people of Dublin during his 18-day stay. He greeted people in a familiar style. It was also reported that he “frequently showed himself in the streets of Dublin, where he made friends with the populace, shook rough followers by the hand and called them ‘Jack’.”