In 1922 Ireland won its independence from Britain and, after the initial distraction of a civil war, the country began to move on and set about its primary task of nation-building. The process that followed was difficult and divisive and one of the things deemed essential for the new state was its own currency. On 13th April 1926, the Coinage Act of 1926 became law :-

This Act did not, however, determine their designs: it left the choice of designs to the Minister for Finance and gave him power to prescribe the designs by Order.

The Minister for Finance agreed and set up a 5-man committee:

With both politics and society still polarised by the Civil War agenda, the competition, its participants and the design proposals were always going to be controversial and would attract criticism from some very embittered, but still influential people.  The committee would have to tread carefully.

The first meeting of the Committee was held on the 17th June, 1926, and was attended by Mr. Joseph Brennan, at that time Secretary to the Department of Finance and later Chairman of the Currency Commission.  Mr. Brennan said that he “wished to convey to the Committee three provisional decisions which had been arrived at by the Minister for Finance in regard to the coins, but which were not to be regarded as the final decisions of the Minister or the Government, or as binding on the Committee.”

These three conditions were :-

Having taken on board the three requisites above, the committee sought advice from far and wide. After much internal debate and deliberation, Yeats declared that they

“decided upon birds and beasts, the artist, the experience of centuries has shown, might achieve a masterpiece, and might, or so it seemed to use, please those that would look longer at each coin than anybody else, artists and children. Besides, what better symbols could we find for this horse riding, salmon fishing, cattle raising country?“

In the end, the committee decided upon the following subjects for the reverse designs :-

The next controversy would be “who to invite to compete?”

In the end, they chose two Dublin sculptors of repute (Albert Power and Oliver Sheppard) and Jerome Connor (who had recently arrived in Ireland from New York.  The next part was more difficult as they had little knowledge of the ‘foreign’ talent. Like the Irish contenders, not everyone accepted the invitation and they eventually shortlisted the following :-

The least well-known and least accomplished (at the time) of the seven artists invited, Metcalfe was recommended as “an up and coming sculptor/designer.  He studied art in Leeds, and in 1914 attended the Royal College of Art London.  He produced many designs for Ashtead Pottery between 1923 and 1936.

His later works include :- 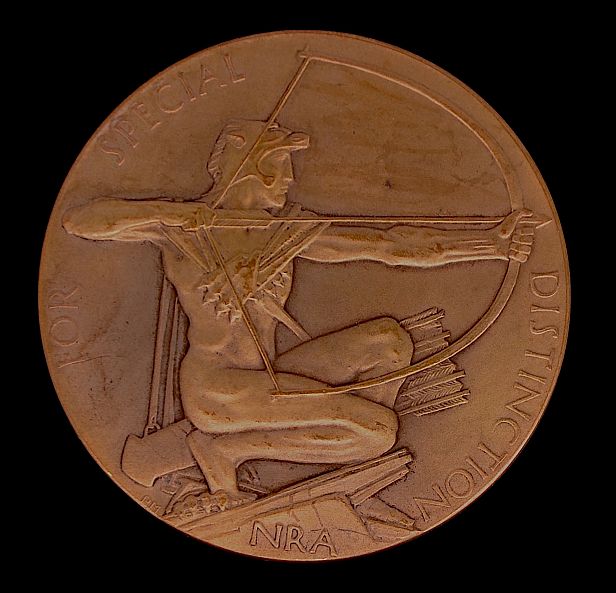 This fabulous bronze medal is by Percy Metcalfe and was struck for the National Rifle Association’s (UK) Kings Trophy Competition between 1925-30. The obverse depicts a kneeling semi-clad male archer looking left to right with a fully drawn longbow.

Once he was declared the winner of this competition, Metcalfe’s original designs underwent significant design changes – some aesthetic and some for technical ‘minting’ considerations.

Modern reproductions (3-D prints) of his original plaster cast models can be seen at The Central Bank of Ireland’s wonderful Irish Coins exhibit at their new headquarters on Dublin’s North Wall Quay.

Metcalfe created a portrait of King George V which was used as the obverse for coins of Australia, Canada, Fiji, Mauritius, New Zealand and Southern Rhodesia in the 1930s and, perhaps best known of all, is his Art Deco design for the reverse of Britain’s 1935 Silver Jubilee crown.

Metcalfe designed the reverse of the 1935 Crown, featuring an Art Deco rendering of St. George slaying the dragon.