The silver sixpences and shillings of this issue are more easily obtained at auction than the much less well preserved farthing issues. Modern fakes exist, so do make sure to buy from a reputable source. See below (Coins of Necessity: Cork) for details of the genuine coins.

Protagonists of the Great Rebellion 1641-52

It should, however, be borne in mind that there were at least five opposing parties during the rebellion, which have been described by Carlyle as follows :

Leaders from each group switched sides, and some even switched back again in order to progress personal ambition and/or to survive the pendulum of fortune of the English Civil War. Military actions in Ireland were seasonal and individual campaigns ebbed and flowed in sych with happenings in England and Scotland – hence the term War of the Three Kingdoms.

From 1641, the English had put into action a scorched earth policy to cripple the insurgents: starvation and famine were recognised throughout Europe as a brutally effective stratagem of bringing rebels to heel.

Murrough O’Brien, the Baron of Inchiquin and leader of the Munster Protestant forces described his condition as desperate in a letter to Parliament in May 1643. In reality, his forces seem to have been in a better shape than those of the other regions of Ireland, having by then taken control of most of the towns of the province of Munster. Killamock, a central Munster town located almost exactly halfway between the chief Munster Cities of Limerick and Cork, was Inchiquin’s next target. 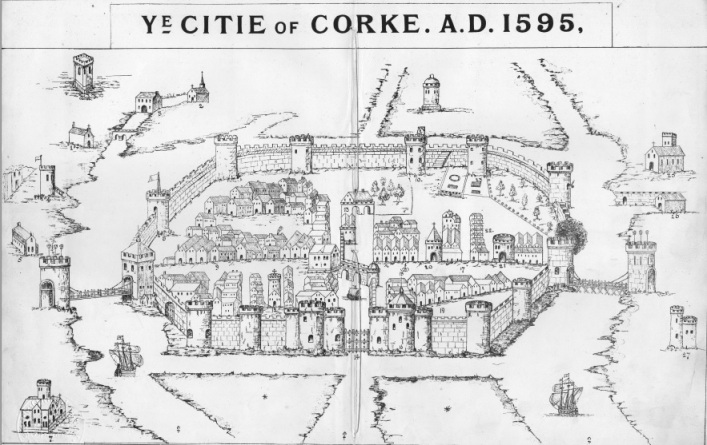 By the 17th C, the City of Cork was a well defended place – with high walls, watch towers and drawbridges guarding all entrances to the town. Map: 1595, City of Cork (map, Pacata Hibernica)

According to Nelson this coinage was struck during the stay of Murrough O’Brien, 6th Baron & Lord Inchiquin (1618-1674), in May 1647. This infamous O’Brien leader was also known as Murrough of the Burnings – testimony to his ‘scorched earth’ policies in Munster and beyond. The City of Cork, in the 1640s was a strongly fortified town surrounded by waterways and could be supplied by sea. It was a safe haven for refugees from its surrounding rural hinterland.

Like the Lord Justices’ Money in Dublin (1642) and the Ormonde Money of 1643/44, the emergency issues of Cork were struck from pieces of silver plate. Unlike Dublin, they also produced smaller denominations from base metals. 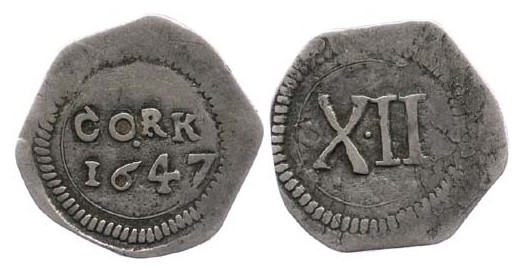 Cities of Refuge, Cork, Sixpence, 2.46g., CORK 1647 in two lines, rev. VI in circle of pellets (S.6561A), weakly struck in one quarter as is the often the case for this emergency issue, good very fine, very rare 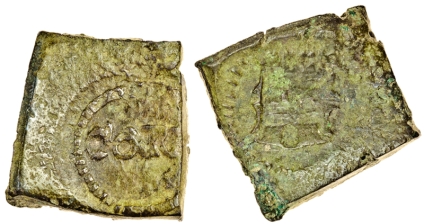 Even after the Great Rebellion was over and Cromwell’s forces finally subjugated Ireland there was a very uneasy peace and, when Cromwell’s son resigned from the Commonwealth, Charles II was invited back to reign as King, albeit with a very strict covenant. With rumours rife of him being a secret Catholic and his likely successor James II being ‘outed’ as a practising Catholic, Ireland became engulfed in a sectarian conflict known as the Williamite Wars – an extension of a greater, European War – of which, Ireland was the last battlefield. Once again, Cork became a Protestant City of Refuge in the south of Ireland and, once again, the citizens of Cork were forced to issue ’emergency coinages’ in order to facilitate local commerce. Typically, these pieces comprise 17th C Irish traders tokens countermarked with “Corke” on the obverse.

Cities of Refuge, Cork. Farthing. Lion’s head and CORKE within a beaded oval countermarked on a Brass Cork Penny Token of William Ballard (1677). S.6562B. Countermark weakly applied at bottom and at left. Crude, but considered Fine for this issue.

These are rare coins and seldom seen at auction. Sadly, they have been subject to forgery during the 20th C and collectors need to be very careful when buying coins from an unreliable source, i.e. from someone other than a reputable dealer or established auction house.