Being born in 1960, I am very comfortable with currency changes since during my lifetime I have used three completely different currencies.  Of course, there was a subtle change in 1978 when the money in our pockets stayed the same but the banknotes changed design.  Although things went on as before in Ireland, our new banknotes were worth far less in the UK, so technically I have lived through four currency changes.

Most Irish people are unaware of this but the simple fact is that, up until 1978, we were tied to the UK pound and the Irish currency was pegged at 1:1 to the UK pound.  We were all shocked to see our currency plummet to half its previous value after we broke with Sterling and it wasn’t until the early 1990s that we finally achieved parity with Sterling.  Like the Cypriot pound, the Irish pound, or punt, even surpassed its former colonial financial master in the mid-1990s.

Even more surprising, to most Irish people, is that up until 1960 all Irish banknotes were guaranteed by the Bank of England and their design contained the words “pounds Sterling payable to the bearer on demand in London.”  This panel quietly disappeared from view in 1961 and no real change occurred.  This is why so-called English coins circulated alongside our own in Ireland until 1971.  Most of our coins were the same size, shape and weight as the English coins, with the exception of the threepence and sixpence.

Even today, shops and service providers in London are reluctant to accept banknotes, other than Bank of England notes.  It is a source of irritation for visitors from Northern Ireland, Scotland, Guernsey, Jersey and the Isle of Man when their banknotes are refused at the till.  Although they lose nothing at the exchange, they still have to go to a bank (and possibly queue) to have them changed.

In February 1971, Ireland and the UK changed from the old imperial currency of pounds, shillings and pence to a decimal currency.  The old currency was simply unmanageable.  For example,

During the 20th century, many of the old imperial coins disappeared and we in Ireland, when we got our currency in 1928, had 8 coins. We didn’t issue crowns (5 shillings) or gold coins, but our silver coins contained 75% silver, as opposed to 50% in British coins of the same period.  We stopped producing silver coins in 1943 and the British stopped soon after in 1946.

To make matters worse, some of the old names were still in use, even though the coins had disappeared, e.g. groat, crown and guinea.

In the 19th C, there were half-guinea and one-third guinea coins – worth ten shillings & sixpence and 7 shillings, respectively.  These were gold coins and seldom seen in pocket change but up until the 1970s people in Ireland bought houses, cars, horses and fur coats in guineas.  It may have been a throw-back to the old British class system but people thought of themselves as being more important when they bought goods and services in guineas.  Solicitors, accountants and other professional people invoiced their customer in guineas, despite the fact that these coins had been withdrawn in the mid-1800’s.

Amazingly, the value of these coins survived more than a hundred years after they were withdrawn from circulation – even today, the first two classics of the equestrian flat-racing season are still known as the 1,000 and 2,000 guineas.  Needless to say, the prize money is a lot more than 2,000 guineas (£2,100 in Irish punts, or €2,667 in today’s money).

In 1966, Ireland produced a silver 10 shilling (10/-) coin to commemorate the 50th anniversary of the 1916 Rising and it was not popular with the public.  In 1967, with the outbreak of the Israeli-Arab War, the price of silver rose and the coin was worth more than its face value for its silver bullion content.  In 1972, with another Israeli-Arab war, the price of silver jumped again and a ten shilling coin (face value 50p) was worth £3.50 as a piece of precious metal. 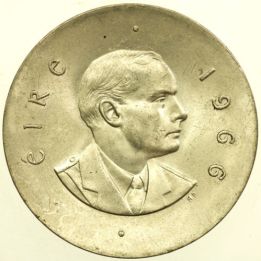 In 1971, there were a few anomalies in changing from a 240-penny pound to a 100-penny pound.  The old penny was 1d, where the new penny became known as 1p.  The reason the old penny was known as 1d goes back a thousand years when pennies were silver and contained a pennyweight of silver (dwt).  Although the silver amount decreased over the centuries, the ‘d’ to denote penny stayed.  The shilling was denoted by ‘s’ and the pound by the letter ‘L’ from the original gold pound coin which was known as a ‘livre’ – an Anglo-Norman term used by the French-bred kings of England in medieval times.  With the loss of their French lands, they changed the name to a pound but the acronym for pounds, shillings and pence remained as ‘Lsd’.

I can remember everyone whinging about how much prices went up after the change-over.  For example, one old penny = one new halfpenny, or ½p.  Inexplicably, 2 old pennies and 3 old pennies were both worth 1 new penny, or 1p.  In theory, assuming one had enough patience, and time, and old pennies – one could change 2 old pennies for 1p, and keep on going back with 2 more old pennies – making 20% more than one should, i.e. 240 old pennies = 120 new pennies if changed 2 at a time, whereas if one changed them all at once, one only got 100 !

I wonder if anyone actually did this?

So, in 1971 we got a new currency but only the coins looked different and were worth a different amount.  In line with previous coins, the Irish coins were the same size, weight and value as their English counterparts.  Northern Ireland, Scotland and Wales did not have their own coins, but as time went by, they would have some regional designs on the one and two-pound coins.

Another interesting anomaly occurred in the 1970s when people began to travel and work in the newly enlarged EEC (now known as the EU) without the need for visa’s or work permits, i.e. we discovered that the English and Irish 5p coins were the same size and weight as the deutschemark.  There were 20 5p coins in a pound but the Irish and the British pound was worth approx. 3 deutschemarks and the Germans were not too happy when they found their vending machines filled with 5p coins that could not be exchanged in German banks.  Irish and British travellers were delighted to exchange 5p of for 33p worth of goods (cigarettes, condoms, etc.) or services (phone calls, train, bus and parking tickets).

It was not until 1990 that we changed the size of our 5p coins – meanwhile German vending machine operators had to suffer the losses and Irish/British travellers got an 80% discount by bringing bags of 5p coins with them.

Something similar happened here in 1990, when the new one pound coins were introduced.  Some clever person noticed than the new pound coins were a similar size and weight to the old pre-decimal pennies.  They experimented with the vending machines, and could buy old pennies at collectors’ fairs for 20p each – and use them in the newly calibrated vending machines throughout Ireland.  Cigarette machines in pubs were particularly targeted and publicans lost thousands of pounds over the first few weeks after the new coin was introduced. 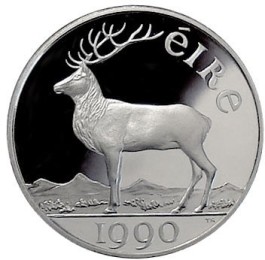 Once again, an 80% discount was obtained by the fraudulent use of old coins.  Unlike the old 5p and deutschemark, there was a small difference in weight and thickness between the old 1d and new £1 coins, so the vending machines were calibrated to be sensitive enough to detect the difference.

In 2002, a completely new currency was introduced as Ireland (and 11 other EU countries + 4 non-EU countries) joined the Euro Zone.  Of the 16 countries that used the Euro on 1st January 2002, only 15 issued their own coins – Andorra decided not to mint coins.  The other 3 non-EU countries were Monaco, San Marino and Vatican City, who issued limited amounts of coins but didn’t necessarily circulate some or all of them.  See my forthcoming blog post on Euro coins for more details.

This, like the 1971 change-over to decimal coinage, involved tricky new calculations re what the new currency was worth and people, once again, whinged over how many prices actually went up.  Governments tried to prevent this but many vendors and service providers simply rounded up their prices – unsurprisingly, nobody rounded down !

Unlike the 1971 change-over, there were also new banknotes, so it was truly a completely new currency.  Each country had an alpha code to denote their own banknotes but many had their banknotes printed abroad to reduce production costs.  In theory, each country printed banknotes but, thus far, no one has found a Luxembourg banknote with the letter ‘R’ prefixing the serial number.  The three countries that did not join also had letters reserved for them, i.e. Denmark, Sweden and the UK.  The Irish banknote serial numbers are prefixed with the letter ‘T’.

The new €5 banknotes have a different design and the country codes have changed.  See my forthcoming blog post on Euro banknotes for more details on this.

One thought on “Irish Currencies, from a Coin Collecting and Banknote Collecting perspective”