Colonial American numismatic history, like much of Irish numismatic history is one of shortages – that led to emergency issues, imported coinages, counterfeiting and local trade tokens. Much of what circulated in Ireland at the time, also circulated in the original thirteen colonies. This new American economy, like Ireland’s, was constantly hampered by oppressive taxes, import/export duties, tariffs and other trade restrictions originating from Westminster but ‘policed’ by their in situ colonial administrators.

With the many ‘pulses’ of immigration from Ireland, came loose coins in their pockets and some, like Mark Newby, even had the skills to produce coins specifically for the rapidly developing American colonial economy. The following articles are about the Irish coins that found their way to America and became an accepted medium of exchange.

In April 1585 Sir Walter Raleigh sent a second expedition to North America. The Area — now North Carolina — was named Virginia in honour of Elizabeth, the Virgin Queen. The English finally arrived off Cape Fear on 23 June 1585. The next day they anchored and fished in the vicinity of present-day Beaufort Inlet. Due to lack of food, reprisals from the native Americans and poor planning, this first attempt at colonisation was a failure.

Several more attempts would fail before the Jamestown settlement in Virginia — officially started on May 14, 1607 — was one of the first European colonies to last in North America.

The earliest waves of Irish emigration date to the second half of the 17th century and the aftermath of the Cromwellian era – most were Catholics. While significant numbers went voluntarily to settle in the West Indies, even more were transported there as slaves.

The inappropriately named St. Patrick’s Farthing is one of the classic 17th C American Colonial coins and very collectible. This example was struck in silver whereas ‘normal’ specimens were struck in copper. See link below for more details.

Up to 1720, when New England was the destination of choice for most, the flow of Irish emigrants was steady but numbers were not large. Numbers rose at the end of that decade and then dropped again. 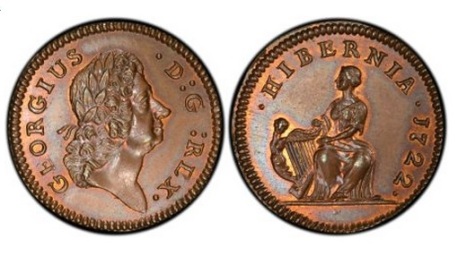 1722 Wood’s Hibernia Farthing, Type I (regular issue). These coins, rather famously, attracted a lot of attention from the then Dean of St Patrick’s Cathedral, Jonathan Swift. One of his Drapier Letters referred to Mr Woods’ coinage.

Ireland 1760, Voce Populi farthing & halfpenny (reverse). Even to a beginner, the small differences in the reverse designs are quite noticeable, e,g, the number of strings in the harps. The farthings are quite rare but the halfpennies (and their major varieties) exist at reasonable prices – see link below for more details.

There have been many books written about transportation to Australia as a punishment for criminal offences but a less well known fact is that from the early 1600’s until the American Revolution of 1776, the British colonies in North America also received ‘transported’ British and Irish criminals.

A common offence was ‘coining’ or forgery of coins of the realm and many people were transported for possessing forgeries, possessing ‘coining’ equipment/tools/materials, or for attempting to complete a transaction with forged coins or banknotes. The latter was a much more serious offence.

In an effort to eliminate the huge amount of private tokens and forged coins that were in circulation, several Acts were passed outlawing these activities. Penalties were severe and, provided the coin was not intended to ‘imitate’ or ‘copy’ a coin of the realm, the counterfeit laws did not apply. The counterfeiters began to produce coins that were sufficiently different in appearance so as to avoid the law, i.e. the so-called evasion halfpennies of the late 18th C.

As the laws began to be enforced, these unofficial tokens and evasion halfpennies made their way to the American Colonies where the shortage of copper coins allowed these ‘under weight’ imports to circulate.