Strictly speaking, the 1st Lord Baltimore wasn’t really Irish, although he was a member of the Irish peerage, had an Irish title and and resided on his Irish estates shortly before travelling to the Americas to set up his first colony in Newfoundland. He died just after acquiring the charter for Maryland.

The 1st Lord Baltimore (George Calvert) is best known as an English politician who achieved domestic political success as a Member of Parliament and later Secretary of State under King James I. It could also be argued that he wasn’t English either because his family originally came from Flanders (a Dutch-speaking area today across the English Channel in modern-day Kingdom of Belgium).

Plantations in 16th and 17th century Ireland were the confiscation of land by the English crown and the colonisation of this land with settlers from England (particularly the Border Counties) and the Scottish Lowlands. This process began during the reign of Henry VIII and continued under Mary I and Elizabeth I but it was accelerated under James I

The Catholic Calvert household suffered the intrusion of the Elizabethan-era religious laws. From the year of George’s birth onwards, his father, Leonard Calvert was subjected to repeated harassment by the Yorkshire authorities, who in 1580 extracted a promise of conformity from him, compelling his attendance at the Church of England services, i.e. they were forced to convert to Anglicanism. During these times, many Catholics converted in order to improve their economic and.or political career prospects – a trend that was continued in Ireland up until the 18th C – where they are collectively known as the ‘improvenatii’ by some historians.

Calvert lost much of his political power after his support for a failed marriage alliance between Prince Charles (later to become King Charles I) and the Catholic Spanish House of Habsburg royal family.

As the chief parliamentary spokesman for an abandoned policy, Calvert no longer served a useful purpose to the English Royal Court, and by February 1624 his duties had been restricted to placating the Spanish ambassador. The degree of his disfavour was shown when he was reprimanded for supposedly delaying diplomatic letters.

Part of the reason for the political downfall of Calvert was his Catholicism, or at least his tolerance of it at a time when tolerance was in vogue. but the connection between Calvert’s resignation and his conversion to Roman Catholicism was a complex one.

After resigning the Royal secretariat of state in 1625, the new Baron Baltimore made clear his intention to visit the colony: “I intend shortly,” he wrote in March, “God willing, a journey for Newfoundland to visit a plantation which I began there some few years since.”

Calvert had long maintained an interest in the exploration and settlement of the New World, beginning with his investment of twenty-five pounds in the second Virginia Company in 1609, and a few months later a more substantial sum in the East India Company, which he increased in 1614.

In late September or October 1629, Baltimore arrived in Jamestown, where the Virginians, who suspected him of designs on some of their territory and vehemently opposed Catholicism, gave him a cool welcome. They gave him the oaths of supremacy and allegiance, which he refused to take, so they ordered him to leave.

At the time of his birth, his father was under pressure for conformity, and all ten children were baptised as Christians in the Anglican (Protestant) tradition. Before he died, George Calvert converted back to Catholocism and his male children seemed to have quickly followed him. As an English Roman Catholic, he continued the legacy of his father by promoting religious tolerance in the colony. Maryland thus became a haven for Catholics in the New World, particularly important at a time of religious persecution in England. 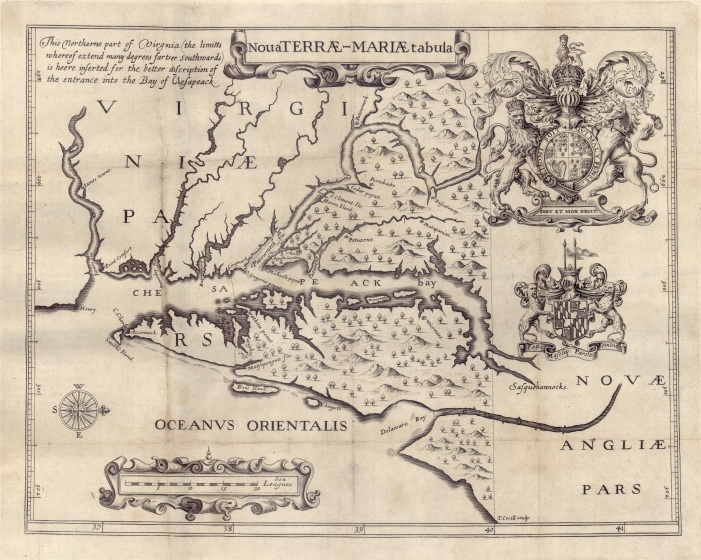 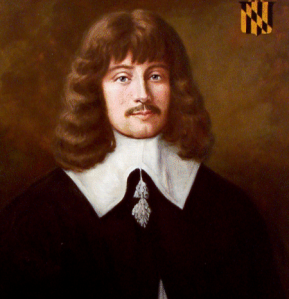 The first expedition (1634) comprised two ships (formerly owned by Baltimore’s father George), the “Ark” and “Dove.” They departed from Gravesend in Kent with 128 settlers on board. They were chased and forced to return by the British Royal Navy so that the settlers would take an oath of allegiance to the King as required by law. They then sailed in October 1632 for the Isle of Wight to pick up more settlers. There, two Jesuit priests (including Father Andrew White) and nearly 200 more settlers boarded before the ships set out across the Atlantic Ocean.

Lord Baltimore sent detailed instructions for the governance of the colony. He directed his brother to seek information about those who had tried to thwart the colony and he also emphasised the importance of religious toleration among the colonists, who numbered nearly equally Catholic and Protestant.

The enterprise took place in the context of serious unrest in England. In 1629, King Charles I had dissolved Parliament and governed for the next eleven years without consultation from any representative body.

In 1649, Maryland passed the Maryland Toleration Act, also known as the “Act Concerning Religion”, mandating religious tolerance for Trinitarian Christians only (those who profess faith in the “Holy Trinity” – Father, Son and Holy Spirit, excluding Nontrinitarian faiths). Passed on 21 September 1649, by the General Assembly of the Maryland colony, it was the first law establishing religious tolerance in the British North American colonies. The Calvert family sought enactment of the law to protect Catholic settlers and Nonconformist Protestants who did not conform to the established state Church of England.

Cecil Calvert, or 2nd Lord Baltimore, was born in Kent (8 August 1605) and, when his mother Anne Mynne (or Mayne) died in 1622, his father and his children openly converted to Catholicism. The family moved to Ireland in 1625 but when Cecil married Anne Arundell, daughter of the 1st Baron Arundell of Wardour, in 1627 or 1628, it is likely he was by then living in London.

In 1628 Cecil accompanied his father, along with most of his siblings and his stepmother, to the new colony of Newfoundland. The colony failed due to disease, extreme cold and attacks by the French and the family returned to England. His step-mother was drowned on the return trip and this may have hastened his father’s death. Cecil Calvert inherited his father’s colony of Maryland in 1632.

The Maryland groat (fourpence), sixpence, and shilling were contemporaneous with the silver coinage in the nearby Massachusetts colony, but are much scarcer, since the Maryland pieces were struck only for a comparatively short period of time.

Most controversially, at the time, they did not display the portrait of any king, since Charles I had been beheaded in 1649 and Charles II would not ascend to the throne until 1660, i.e. they were first produced during the Interregnum (or gap in the monarchy) and during the Commonwealth period – a failed republican experiment in England.

On October 16, 1659, Cecil Calvert sent a letter to his brother Philip Calvert in Maryland along with samples of a new “Maryland money” that he intended to circulate in the colony. Shortly after this letter arrived, the governor of the colony, Josias Fendall, led an unsuccessful attempt to overthrow Calvert. This immediate threat pushed the coinage issue into the background. By November 1660 the rebellion was crushed and Philip Calvert assumed the governorship.

The Lord Baltimore coinage denominations included the denarium (penny) copper patterns, along with silver groats (four pence), sixpence, and shillings (twelve pence), struck at London’s Tower Mint (or by employees thereof at its facilities) at the behest of Lord Baltimore for shipment to and use in Maryland.

Lord Baltimore, despite the plenipotentiary rights and powers conferred upon him by the royal charter, was neither specifically granted nor enjoined from the right to coin money, but in any case an action was taken against him by Richard Pight, Clerk of the Irons of the Tower Mint, and he was summoned to appear before the Privy Council. The objections were mainly of two kinds.

No disciplinary action appears to have been taken by the Privy Council, however. Calvert overcame numerous objections both in England and in Maryland to his coinage, and by 1662 a mandatory exchange of tobacco for coinage finally propelled the silver Lord Baltimore pieces into circulation.

The charges concluded that “an unknown mint in London, perhaps the Tower, produced a limited number of coins for Cecil Calvert to aid Maryland commerce”

At the time the Lord Baltimore coinage was struck at the Tower Mint, apparently sometime between May and October 1659 (and perhaps on more than one occasion), there was effectively no head of government in England.

The silver content of the Lord Baltimore coins was more problematic than the image that they bore, as the coins were struck of sterling silver but contained less net silver than their English counterparts — the infrequently struck English fourpence were of lower fineness but higher silver content.

Lord Calvert was actually arrested in October, 1659, in London, for the illegal export of silver from England to his Maryland colony. Though no official records exist of his adjudication, it is presumed that an arrangement was made for him to keep the coins in question and transport them home, where the silver pieces circulated extensively.

The state of Maryland is one of only two among the “original 13” that was controlled directly by the same family at the time of its foundation and the beginning of the American Revolution. (Pennsylvania is the other.) Both families have Irish connections.

The extremely rare Lord Baltimore Maryland Penny, or Denarium, is known by only eight or so examples. There is some speculation that these pieces were patterns, but other evidence, including wear on some specimens and one piece recovered by a metal detector, indicates that they might have actually circulated for some considerable time.

However, a 1671 account of Maryland commerce mentions only “groats, sixpences, and shillings … which his Lordship at his own expense caused to be coined” along with barter and English and other foreign coins as the principal means of exchange. This would suggest that the denarium or penny coins struck in copper were strictly a pattern issue.

The legend reinforces that the coinage was a proclamation of Lord Baltimore’s sovereignty as well as an apparent commercial necessity.

The reverse design is substantially different from the Maryland silver coins.

Throughout these descriptions, the modern letter U is used, rather than the archaic V that appears in its place on these coins.

And the AE in CAECILIUS, MARIAE, and TERRAE is uniformly engraved on the coins in its ligature form, i.e. the A and E are connected

Another interesting fact is the presence of Latin legends, as opposed to English, on the Lord Baltimore coins; the Lord Baltimore coins were struck towards the end of the Interregnum or Commonwealth period (1649-1660) when there was no British monarch, a period during which British coinage bore English legends. The Spink standard reference notes that “the coins struck during the Commonwealth have inscriptions in English instead of Latin which was considered to savour too much of popery.”

Two varieties of Lord Baltimore Maryland Groat (fourpence) are known: a unique Small Bust variant and the Large Bust variety (shown above). Examples are known in a wide range of grades, which suggests that these coins saw circulation over an extended period in Maryland and, perhaps, elsewhere in the 13 ‘New England’ colonies.

The coin illustrated above is a Hodder 1-A fourpence die type.

In November 13-14, 2002, a hoard of 19 sixpence was sold by the auction firm Morton & Eden, Ltd. in London, England.  The coins had been discovered in an English country house in a small, cylindrical, silver counter box.  The hoard contained a single example of the extremely rare MVLTILICAMINI (Lot 785, “Small Bust, Dies 2-D) variant that sold for the equivalent of $50,432.00 to Stack’s.

There are two known varieties of Lord Baltimore Maryland shillings :-