The rather eccentric Mr Reginald Huth is sometimes described as ‘a gentleman of leisure’ but his actual occupation is not known for certain – the Huth family were best known as financiers in the City of London. According to one source, he was ‘the London representative of the Bank of Spain’ though what he actually did in this role is unclear, since he seems to have been pre-occupied with collecting English, Spanish and Russian coins and medals.

From an Irish numismatic history viewpoint, he is best known for his ‘fantasy patterns’ of 1900 when he commemorated Queen Victoria’s visit to Ireland with a series of unofficial, coin-like issues via a private commission at John Pinches 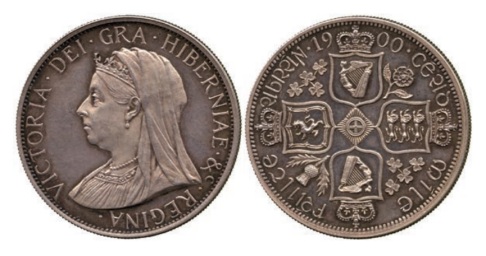 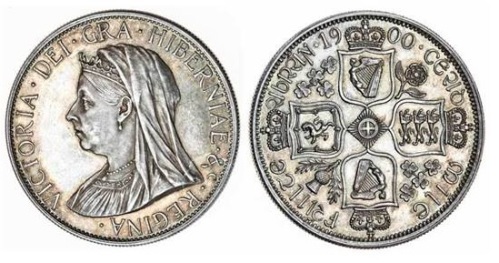 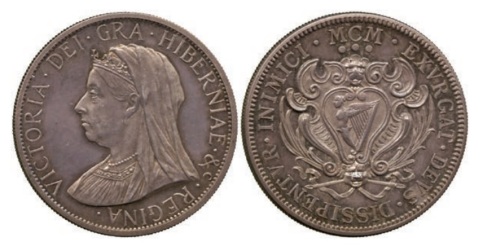 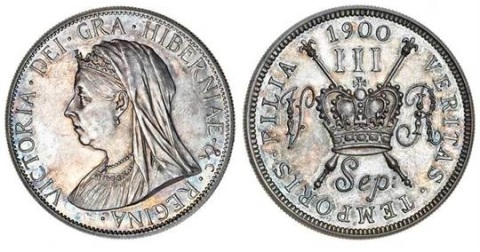 Struck in steel on a 35.1mm flan, 3.75mm thick, for Reginald Huth by John Pinches. Struck to commemorate Victoria’s visit to Ireland and this piece specifically to Kilrush in Western Ireland on 25th September 1900. This piece is not silver and seems to be made of steel on account of its light weight and magnetism 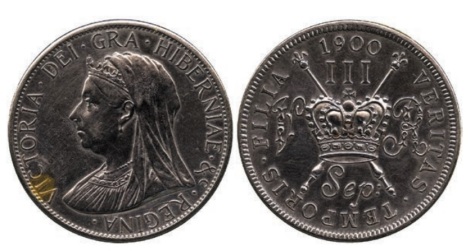 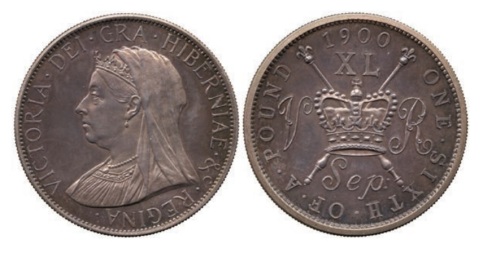 Who was Reginald Huth?

Reginald Huth was born on 11 June 1853 at London and was the son of Charles Frederick Huth and Frances Caroline Marshall. He is listed in Biographical Dictionary of Medallists, Coin, Gem, and Seal-Engravers, Mint Masters, &c., Ancient and Modern with References to their Works, B.C. 500 – A.D. 1900, Volume II, 1904 Biographical Dictionary of Medallists as being an active issuer of private (fantasy) patterns between 1891 and 1904. His reference is as follows :-

a ‘well-known London Collector of Coins and Medals, who has issued, of late years, a number of private Patterns for coins (Pièces de fantaisie) and Medallic Portraits. These pieces, which combine artistic taste in the design and composition with skilful and excellent execution, were struck by Messrs Pinches & Co, London Die-sinkers and Medallists, under the direct supervision of Mr. Huth’

Reginald’s father, Charles Frederick Huth was the eldest son of merchant banker Johann Freidrich Andreas Huth (1777 – 1864). He was born in Spain but moved to London in 1809. There, he married Frances Caroline Marshall (died 1901) in 1836 and they lived in Tunbridge Wells, in Kent

He lived at various addresses in England during his lifetime :-

Other patterns for Reginald Huth

Huth was fascinated by deposed queens and princesses including Liliuokalani and her niece Princess Kaiulani, in whose name he created silver Dala and gold 20 Dala fantasy patterns. Other historical figures honored by him were Madagascar’s Queen Ranavalo; Spain’s deposed Isabel II and the Queen Regent Maria Cristina; Infanta of Spain Luisa Fernanda, Duchess of Mompensier; and the youthful King Alfonso XIII. Huth created several patterns for King George V. The death of his own mother was marked by a coin-like medal of 1901.

In addition to the above, Huth also had a medallion made in memory of his dead mother, Mrs F.C. Huth 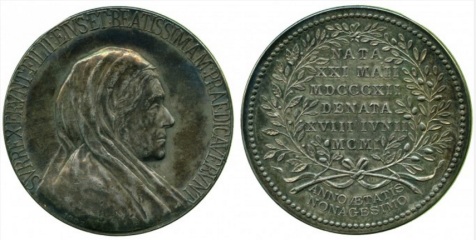 Who are John Pinches & Co?

John Pinches Medallists were founded in or around 1840 by John Pinches (1825-1905), who had learned steel engraving from his mother’s cousin, medallist William Joseph Taylor (beginning when John was 15 years old in 1840, the year the firm determined as its founding)

Three other members of the Pinches family were associated with the firm after the first John Pinches:

A number of 19th C medals or medallions by John Pinches are owned by the British National Portrait Gallery. The ‘not so famous’ second issue of Puffin coins of Lundy Island were struck by Pinches & Co in 1965.

In 1965, a second issue of coins, made by John Pinches, was carried out. These were a commemorative issue to commemorate the 40th anniversary of Martin Coles Harman’s purchase of Lundy. The coins are of the same design as the 1929 issue coins, but have plain edges and the 1965 date.

In 1969, Pinches & Co was sold to the Franklin Mint, of Media, Pennsylvania