By 1760 small copper coins were scarce in Ireland.

Issues of both denominations were scheduled to be minted in 1760 but apparently they did not arrive in Ireland until 1762. It has been speculated this was partly due to the death of George II in October of 1760. Under these circumstances underweight Voce Populi  farthings and halfpence first appeared in Dublin.  After the arrival of the new ‘regal’ coppers, it is thought that Dublin speculators bought the Voce Populi tokens in quantity and shipped them to America, where they circulated widely until the Revolutionary War.

Voce Populi farthings with small lettering are extremely rare and they do not appear very often at auctions.  When they do, they tend to attract a lot of attention, i.e. frenetic bidding and high prices.

“that several copper smiths, tinkers and other persons have been and are now engaged in different parts of the city and the suburbs thereof in forming of base metal into an imitation of the copper half-pence current through this Kingdom”

Over time these issues were supplemented with regal George III Irish halfpence (produced in 1766, 1769, 1774-1776 and 1781-1782) and many lightweight counterfeit and imitation Irish copper coins.

The now 17 different obverse design varieties suggest that there may have been more than one mint or individual producing these pieces, i.e. John Roche, Edward Barry, and “several copper smiths, tinkers and other persons” mentioned by Dublin’s Lord Mayor (John Tew) in his proclamation during August 1760. 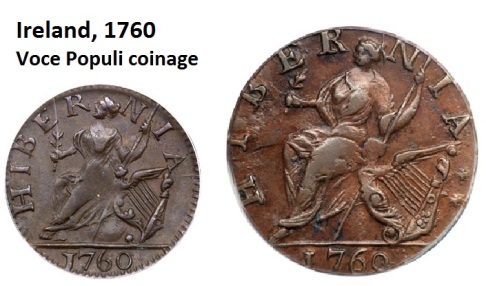 Ireland 1760, Voce Populi farthing & halfpenny (reverse). Even to a beginner, the small differences in the reverse designs are quite noticeable, e,g, the number of strings in the harps

The Voce Populi Nelson-9, or “stern head” is the most common obverse type, therefore this might be considered “normal” even though we are still not sure which of the obverse designs were actually first produced by John Roche, in Dublin 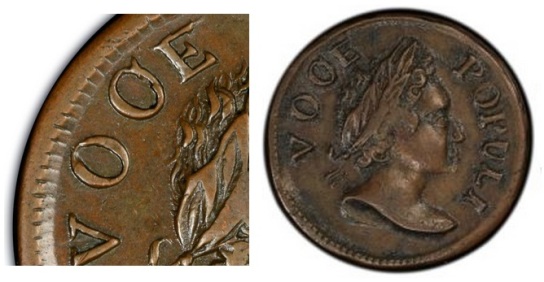 The recently discovered and unique Voce Populi halfpenny (Nelson-17) variety most closely resembles the Voce Populi variety identified as Nelson 4 and Zelinka 2-A. The established variety shares a reverse die with the new discovery, but the obverse on the new coin is from an entirely new die.

John Kraljevich, an expert in Colonial numismatics who is author of the monthly Coin World column “Colonial America” and a numismatic consultant for Stack’s Bowers, cataloged the new variety for the auction.

According to Kraljevich, the Nelson 17 variety most closely resembles the Voce Populi variety identified as Nelson 4 and Zelinka 2-A. The established variety shares a reverse die with the new discovery, but the obverse on the new coin is from an entirely new die, Kraljevich said.

“The head punch is quite tall, like Nelson-4, but shows distinctive details: thinner and more pointed leaves in the laurel, an extra curlicue curl between the two hair ribbons and the back of the neck, a more Roman style nose and higher, more prominent lips,” according to Kraljevich’s auction lot description for the Nelson 17 variety.

“The reverse appears to be in a later state here, with the olive spray in a more abraded state, perhaps through die lapping or just wear. The quatrefoils are less crisp here than on Nelson-4, and the flaw left of the date appears more prominent.”

Although there is no numismatic evidence of them being ‘officially’ exported (in bulk) to the American Colonies, they do seem to have circulated there and many American collectors include them as part of their ‘colonial’ or ‘pre-Declaration’ (of Independence) numismatic heritage, i.e. both Irish and American collectors collect them.

With avid collectors on both sides of the Atlantic, the consequent excess of demand over supply is what makes these coins so expensive.

Who was John Roche ?

According to the Dictionary of Irish Artists (1913), John Roche was “a metal-worker who lived at the Golden Heart, Usher Street, Usher’s Quay, and afterwards in King Street, off St Stephen’s Green, Dublin”.  Their entry for John Roche goes on to say the following …

Roche in 1741 applied to the Dublin Society for its encouragement and help in the making of “Birmingham ware” which he had introduced into Ireland.

In an advertisement issued by him from the Golden Heart in March, 1747, he describes himself as the “only person in this Kingdom who makes all sorts of gilt, silver and plated coat buttons for gentlemen’s wear, metal buttons for livery, gilt and metal sleeve-buttons, iron, steel and metal shoe-buckles and other kinds of hardware” (“Faulkner’s Journal,” 28th February, 3rd March, 1746-7).

In the same year he petitioned the Irish Parliament, praying for encouragement in the manufacture of hardware; and in 1759, in response to a further appeal to the Dublin Society for help in carrying on his manufacture of Birmingham ware, the Society lent him one hundred pounds.

NOTE: In Grueber’s “Medallic Illustrations of the History of Great Britain and Ireland,” 1885, and in Forrer’s “Biographical Dictionary of Medallists,” John Roche is erroneously named as “John Vernon Roche.”

Jerry Zelinka, “The Enigmatic Voce Populi Halfpenny of 1760,” The Colonial Newsletter 15 (October 1976, serial no. 47), 556-65, discusses the coin as well as describing and illustrating 16 different die combinations

Dowle and Finn, The Guide Book to the Coinage of Ireland, 1969