William Wood was the owner of several copper and tin mines in England and he hoped to make a large profit via the production of coins for use in Ireland and America.  During the first half of 1722 King George I’s mistress (who had followed him over from Germany), the Duchess of Kendal, obtained a patent from the Earl of Sunderland for coining copper money for Ireland.

Wood thought this would be a profitable enterprise so he purchased the royal patent from the duchess for £10,000.

Ehrengard Melusine von der Schulenburg, Duchess of Kendal, Duchess of Munster (25 December 1667 – 10 May 1743) was a long-time mistress to King George I of Great Britain.

In his indenture from George I dated June 16, 1722 Wood was authorized to produce up to 360 tons of halfpence and farthings for Ireland at 30 pence to the pound over a period of fourteen years for an annual fee of £800 paid to the king.

It has also generally been held that the Irish did not accept the Hibernia coppers and much has been said about Dean Swift’s Drapier Letters, the duplicity of the Irish authorities and the political intrigues of the Tories and Whigs in England.

It is a popular myth that the Irish refused to use the coinage on nationalistic grounds and that they relied on copper tokens (and, possibly, the Saint Patrick coppers) but this seems unlikely.

These coins are available in much better condition than the earlier regal copper issues and uncirculated coins with considerable red mint lustre are available albeit scarce and expensive.  Wood’s Coinage is actively collected as part of the American ‘colonial series’ so there are listings of their values in the ‘Red Book’, the ‘Blue Book’ and from many other US sources – including numerous American numismatic websites. 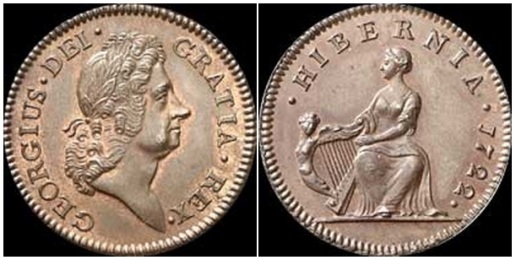 <no image of the above coin, yet>

There are also a number of patterns available for this series.  They are highly collectible and attract much attention when they appear at auction. They are available in a range of metals and a small number of varieties have been noted. 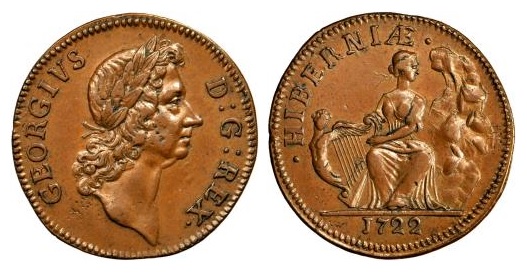 For the specialist collector, there are a number of other (less obvious) varieties of these coins.

For the Hibernia farthing Nelson listed six types, which Breen expanded to eleven.

These 16 dies are found in 14 combinations as follows:

These 40 dies are found in 36 combinations as follows:

Several different device punches were used for the royal bust and Hibernia (Martin states there are at least three different laurel wreath styles and several variations on Hibernia’s belt).

Further, Martin has suggested (as Hodder has shown for New Jersey coppers) that the emission sequence of these dies was not continuous or in strict chronological order, thus a 1722 obverse would be replaced with a 1723 obverse and then later re-used.