In 1722, the ‘hardware’ manufacturer William Wood was granted a patent to produce copper coins to the maximum cash value of up to £108,000 for use in Ireland.

This patent was allegedly secured by a bribe of £10,000 (a not inconsiderable sum in those days) to the Duchess of Kendal, a long term mistress of King George I who moved to England to be close to him.  Although disliked, she accumulated a series of titles conferred upon her by George after he moved to England and became king. 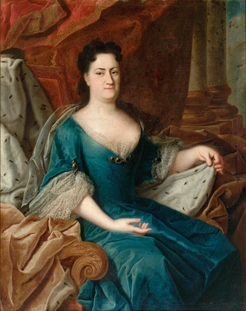 Ehrengard Melusine von der Schulenburg, Duchess of Kendal, Duchess of Munster 1667 – 1743) was a long-time mistress to King George I of Great Britain.

When Wood produced copper coins, assays showed his coins to be significantly underweight and undersized, as well as being made from inferior materials, i.e. not 100% copper.  Despite all of these faults, they were approved by the British Parliament for use in Ireland.  In fairness, they were heavier and of better quality than many of the unofficial farthings (halfpenny and penny tokens of the previous century) that still persisted.

Despite the fact that there was a great shortage of copper coins in Ireland at the time, these coins were subject to the following complaints / concerns :-

Drapier’s Letters is the collective name for a series of seven pamphlets written between 1724 and 1725 by the Dean of St Patrick’s Cathedral in Dublin, Jonathan Swift, in the form of ‘open letters’ to arouse public opinion against the new coins. 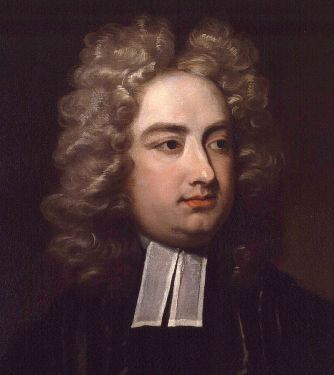 Jonathan Swift (1667 – 1745) was an Anglo-Irish satirist, essayist, political pamphleteer (first for the Whigs, then for the Tories), poet and cleric who became Dean of St Patrick’s Cathedral, Dublin. Swift is remembered for works such as Gulliver’s Travels, A Modest Proposal, A Journal to Stella, Drapier’s Letters, The Battle of the Books, An Argument Against Abolishing Christianity and A Tale of a Tub. He is regarded by the Encyclopædia Britannica as the foremost prose satirist in the English language.

Swift represented Ireland as constitutionally and financially independent of Britain in the Drapier’s Letters and this amounted to sedition and treason in the eyes of the Westminster Parliament – especially since the Act of Union between England and Scotland (to form Great Britain) gave much more economic and political power to Westminster.  Since 1707, any idea that devolved authority back to Scotland was a politically sensitive subject, and Irish attempts to gain more freedom could not be tolerated.  Swift, therefore, had to be careful to write under a pseudonym (M. B., Drapier) to protect himself from retaliation.  Pretending to be a draper, he published seven pamphlets.

The letters were publicly condemned by the Irish government, with prompting from their political masters in the British government but there can be little doubt that most people in Ireland, including members of the Irish Privy Council, knew that Swift was the author of the letters.  It seems unusual that no one reported him to Walpole’s administration, but in the event of this happening, there seems to be insufficient legal proof to merit litigation.

Popular history and simplified accounts often overlook the huge conflict of interest that underlay the actions of the ruling classes in Ireland, i.e. the ruling ascendancy class was based on nepotism, insider dealing and monopolies.  The related subjects of currency and banking was a particularly lucrative money-making scheme – one that persists to this day, i.e. the banks make huge (easy) profits from currency exchange.  At that time, there was periodic shortages of silver coins caused by the political decision to ‘under-value’ Irish silver, thus allowing private bankers to accumulate hoards of bullion (silver) and then bringing from Ireland to England and selling it there at a big profit.

The Drapier Letters inspired popular sentiment against Wood and his coinage.  This quickly developed into a nationwide boycott and forced the patent to be withdrawn before he could finish production.

The remainder of the production run seems to have been exported to ‘the English colonies’ in America where there was a shortage of coin – thus these coins are collected by both Irish and Americans alike.

Meanwhile, Swift was later honoured for this service to the people of Ireland, whereas he was really a hero of the ascendancy and private banking classes.

He was a not popular when he first came to Ireland and one wonders if he had failed, would he have been a convenient scapegoat.  He could have been reported to Government circles at any time, but this did not happen.  He helped the private bankers (and their families) stop Wood’s coinage.  He might be considered lucky.

The full text of each letter can be accessed via the following links :-