The florin (2s or 2/-) coin was a sub-division of the pre-decimal Irish pound, worth 1/10 of a pound.  It was more commonly known as the two-shilling coin.

In the 1927 competition to design the new Irish Free State coins, it was suggested that the florin depict a salmon.  The artists that were invited to enter this competition produced some unusual designs, e.g. 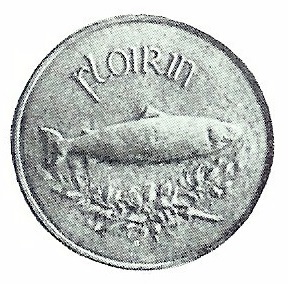 The original issue of this coin (1928 to 1943) contained 75% silver, a higher content than the equivalent British coin. It is believed that this was done so that the new currency would not be seen as a poor substitute to the British currency which circulated alongside.

The last florins were produced in 1968. When the currency was decimalised this coin continued to circulate alongside its replacement ten pence, and the florin was finally withdrawn from 1 June 1994 as a smaller ten pence coin was introduced.  The obvious design changes were :-

Ireland 1978 10p – in 1971 the old florin was replaced by a new 10p coin (which was the same weight, diameter and metal composition as the coins they replaced, i.e. cupro-nickel) 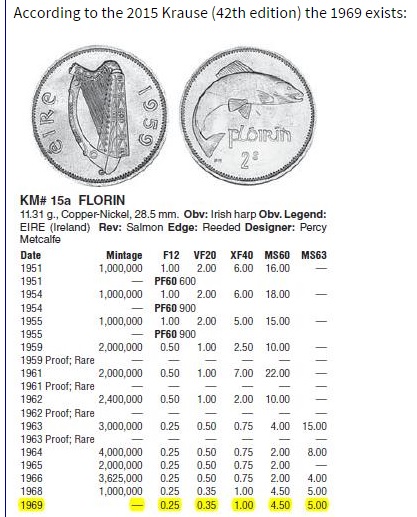 The 2015 Krause (42th edition) coin catalogue erroneously lists a 1969 Irish florin – this coin does not (to the best of my knowledge) exist. There are numerous websites and blogs that ‘copy’ the K&M lists – these sites are simply perpetuating the error. No Irish coin dealer lists this coin.