The St Patrick Halfpenny is thought to have been a ‘milled coin’ minted in the 17th century for use in Ireland, although there is evidence that later versions were minted in the American Colonies. Two sizes are available to collectors – large and small.  Contrary to popular belief, the smaller coin is not a farthing because it does not adhere to the 2:1 standard whereby the weight of two farthings is equal to one halfpenny.

Both reverse designs show King David kneeling playing a harp while gazing up at the royal crown of England. One peculiarity of the harp is that it bears a semi-nude winged female figure on the pillar, a feature which became common on English coins beginning in the second quarter of the 17th century.

The obverse of the smaller copper halfpenny shows Saint Patrick dressed in bishop’s garments wearing a mitre and holding a double-cross crozier. He is depicted dispelling the serpents from Ireland that are portrayed as various aquatic beasts, some are fabulous. In the background is purportedly St Patrick’s Cathedral, Dublin.

The obverse of the larger copper halfpenny shows St Patrick is seen preaching to a crowd gathered round him. To his right is a shield with devices of several towers usually interpreted as three, suggesting the city shield of Dublin. 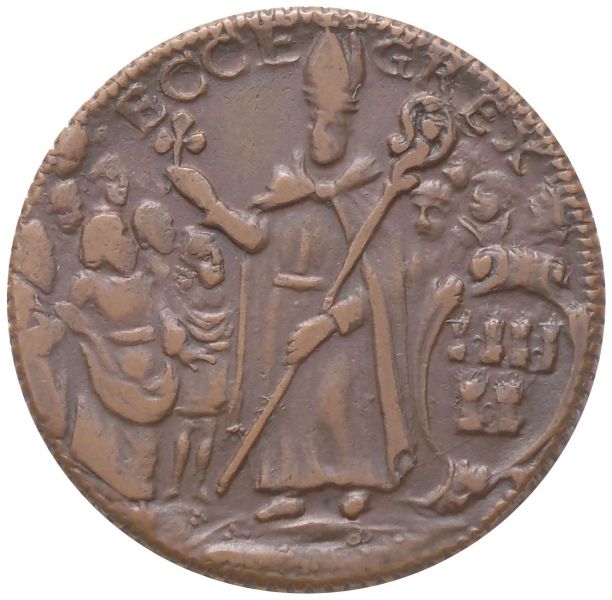 The smaller planchet coin seem to have been much more extensively minted as over 120 die varieties are reported to exist!  Such a massive die production would clearly have kept the mint in operation for at least two to three years. Not only were these smaller sized coins easier to mint but they were also more profitable.

Up until recently, most people described this series as the St Patrick’s halfpennies and farthings. Recently, in 2009, John N. Lupia published an article in the C4 Newsletter outlining ‘new documentary evidence’ that shows both the small and large copper coins are halfpence.

This aside, were they coins intended to circulate, or were they ‘politically-motivated’ issues given to loyal subjects of the exiled king (Charles II), or were they ‘gifts’ from the Church to parishioners?  Some people suggest they were used as pay to Royalist soldiers in exile or ‘in waiting’ for the return of the king – an unlikely scenario, since copper coins do not win wars (silver and gold does).

They were certainly used as a form of payment (de facto currency) in the Isle of Man and in New Jersey, so in these places they were used as coins – whatever about their original intended purpose.  In Ireland, at the time, almost anything passed as coinage since there was a proliferation of ‘unofficial’ farthing-sized coins and tokens being used, so again, whatever their original intended purpose, they were used as coinage in Ireland.

When were they minted?

Since there are no dates on these coins, it is difficult to ascertain precisely when they were minted.

This theory is based on the fact that a single smaller size coin was found in a hoard of 273 coins recovered from the yacht Mary which sank on March 24, 1675, on its way from Dublin to Chester. From this it is certain the production of these ‘smaller’ halfpenny coins date to at least 1675. I would be of the opinion that this coin was minted before the proclamation of 1672 (Making Current the Royal Farthings and Halfpennys and Forbidding the Use of All Others).

The St Patrick’s Halfpennies are certainly anonymous but who could have, or might have minted them?

It has been suggested that they were minted in Dublin between the years 1641-42 – at the height of the Great Rebellion when the Lords Justice were minting silver coins (from plate) in Dublin.  Could these halfpennies have been used as ‘small change’ during the siege? There were silver twopences, threepences, groats and sixpences. It is feasible that these halfpennies might have been minted and used at that time.

There were two other candidates in Dublin in the 1650’s / 1660’s and each has a ‘tenuous’ link to the design of the the St Patrick’s Halfpenny.  Or, perhaps, a third party ‘combined the two ideas’ and produced a token himself.  The main problem with this theory is the fact that the St Patrick’s Halfpennies were larger and weighed more than the ‘typical’ tradesmens’ tokens of the 17th century.

Richard Greenwood, issued a penny token with an image of St Patrick

John Haynes, issued a penny token with a brass plug

Where were they minted?

Where these coins were minted is still uncertain. Given that about 450 different die varieties have been identified and mintage estimates vary from 1.5 million to 7 million pieces, i.e. it is unlikely that these coins were produced by a small, private mint.

For this reason, one researcher has suggested that they were minted at the Tower of London but there is no ‘hard evidence’ to back up this claim. Another researcher has suggested that they they were minted between 1646 to 1660 before the official reign of Charles II of England, while he was in exile in France, the Dutch Republic, and the Spanish Netherlands. All three of these jurisdictions would have had the resources and technology to produce such large quantities of coins … but why would they do so ?

Where were they used?

These coins (or tokens) were used extensively in three different financial jurisdictions, albeit perhaps not simultaneously. The seventeenth century was notable for a number of political, economic and numismatic reasons – in particular :-

They were initially used in Ireland. The two proclamations by Charles II in 1661, prohibiting the issue of tokens seems to have paused the production of ‘unofficial’ farthings (which probably accounts for the comparative rarity of the dates 1660, 1661, and 1662) but they continued to circulate and even had an increase in output thereafter.  Two further proclamations (1672 and 1674) seems to have halted the production of the ‘unofficial’ tradesmens’ farthings but they continued to circulate.

The introduction of Armstrong & Legge’s Irish ‘Regal Halfpennies’ for Charles II in 1680 at last gave the Irish economy much needed small change – thus paving the way for Mark Newby to export a quantity of these St Patrick’s Halfpennies to the American Colonies in 1681.

Sometime prior to 1678 someone brought an unknown quantity of these St Patrick’s Halfpennies to the Isle of Man.

An English Quaker merchant in Dublin named Mark Newby (also spelt Newbie) acquired a large supply of these coins which he took with him in 1681 when he emigrated to West New Jersey (New Jersey was divided into separate Eastern and Western colonies from 1676-1702). Since both small and large St Patrick’s Halfpennies have been found in hoards in the USA, we are not certain which kind (large or small) halfpennies Newby brought with him to the New Jersey.

The only restrictions were that Newby had to put up surety (300 acres of land) that he would exchange the coppers for “pay equivalent” on demand and that one was not required to accept more than five shillings in coppers at one time. When Newby died about a year later, in the fall of 1682, his estate included £30 in coppers, estimated at roughly 10,800 coins.