The Great Re-coinage of 1696 was an attempt by the English Government under King William III to finally replace the hammered silver that made up most of the coinage in circulation, much of it being clipped and badly worn.

This was something that Charles II and James II needed to do but both had failed to do.

English currency was in disarray in the late 17th century and there were three main reasons for this :-

New Acts of Parliament were passed in order to create the Bank of England and protect national military security. This situation also triggered William Lowndes of the Treasury to ask the warden of the Royal Mint, Isaac Newton, for help. 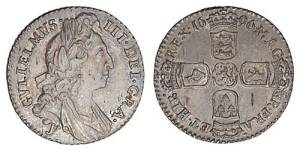 However, the re-coinage was not a financial success.

England eventually committed itself to a gold standard. The only way to maintain silver as coin was to reduce the silver content so that the coin’s nominal value was more than the bullion of the same weight.