Coins of the Roman Empire

This is intended as a simple, introductory guide to Roman coins.  Links to academic and other sources of information are provided for each Roman Emperor and more detailed Roman coin databases are available online.

The Roman Republic (Latin: Res publica Romana) was the period of ancient Roman civilization beginning with the overthrow of Roman Kingdom, traditionally dated to 509 BC, and ending in 27 BC with the establishment of the Roman Empire.  It was during this period that Rome expanded from the city of Rome itself to dominance over the entire Mediterranean world.  Lots of good articles are available about this period of history :-

From a numismatic viewpoint, the Romans (and the Celts) copied the Greek coinage system and the early coins of the republic were copies / imitations of their Greek counterparts.

The Dictatorship of Julius Caesar (45-44 BC)

Ironically, most people believe the most famous Roman emperor was Julius Caesar – a dictator for life, not an emperor – who seized power when Rome was a republic and ruled by democracy.  Although a dictator, he wasn’t the worst of them and historians tell us Julius Caesar was a general, a statesman, a lawgiver, a jurist, an orator, a poet, an historian, a philologer (a combination of literary criticism, history, and linguistic), a mathematician, and an architect.

The word “Caesar” originates from the aristocratic patrician family of Julius Caesar, the man who seized power when Rome was still a republic.  Julius Caesar was, however, undeniably one of the most influential rulers of Rome – his reforms stabilized the Mediterranean world.  He managed to do this because he was dictator for ten years and consul for five … and imperator or commander of an army he was not made to disband, so that he nearly was as powerful as any king at the time.

From a numismatic point of view, Julius Caesar was the first to print his own bust on a Roman coin – perhaps one of the reasons every Roman coin collector wants a coin of Julius Caesar in their collection.  This is, perhaps, why so many think of him as an emperor.  At the very least, he was an empire-builder and his step-son (Augustus) was the first emperor of Rome and expanded the empire even further.

There are hundreds of internet pages dedicated to Julius Caesar and lots of paper-based books too, so I am just listing three links here as a “starter” for finding out more about this most famous of Roman generals.

On the Ides of March (15 March) 44 BC, Caesar was assassinated by a group of senators led by Marcus Junius Brutus – an act made famous by Shakespeare in his play.  A new series of civil wars broke out immediately after the death of Caesar and the constitutional government of the Roman Republic was never restored.  Caesar’s adopted heir Octavian, later known as Augustus, eventually rose to sole power and the era of the Roman Empire began.

The Julian-Claudian Dynasty 27 BC to AD 68 is so-called because its Emperors belonged to the patrician families called the Julii and the Claudii.  The Julii claimed they were descended from the goddess Venus.  Some of the most famous of all of the emperors belonged to this dynasty including the first Roman Emperor, Augustus Caesar who was followed by Tiberius, Caligula, Claudius and Nero.

Gold aureus coin, minted in Rome between 13-14 AD. Laureate head of Augustus is on the left with the inscription “CAESAR AVGVSTVS DIVI F PATER PATRIAE”, on the right is Tiberius riding a chariot with four horses holding his eagle tipped scepter.

Wreathed head of Augustus is on the left with “CAESAR AVGVSTVS” written on it, and on the right is a comet with eight rays with tail upward

Silver Denarius of Augustus with his famous general, Agrippa c. 27 BC-14 AD. Minted in Rome by Caius Sulpicius Platorinus, moneyer. On the left is Augustus bare head with inscription CAESAR AVGVSTVS and Agrippa’s head on the right with M – AGRIPPA PLATORINVS – III – VIR”

The laureate head of Tiberius (left) surrounded with the inscription “TI CAESAR DIVI AVG F AVGVSTVS”, while seated on the right is his mother Livia, holding a scepter and branch with inscription “PONTIF MAXIM”. This coin was minted in Lyon, in the then Roman province of Gaul (now France). 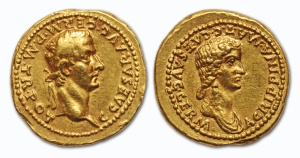 Gold aureus struck at Rome, A.D. 37–38. Caligula’s portrait appears with that of his deceased mother, Agrippina Senior, a political martyr of the reign of Tiberius. 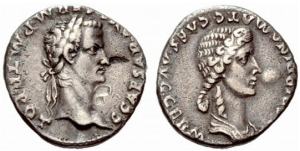 The laureate head of Caligula is shown on the left with emblem “C CAESAR AVG GERM P M TR POT”. Agrippina (the elder) with her braided hair is on the right with the legend “AGRIPPINA MAT C CAES AVG GERM” 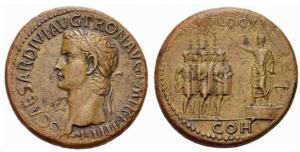 Nero was the last in the Julio-Claudian dynasty – he was adopted by his great-uncle Claudius to become his heir and successor, and succeeded to the throne in 54 AD following Claudius’ death.

During his reign, general Corbulo conducted a successful war and negotiated peace with the Parthian Empire.  He was also active in several other military ventures :-

Infamously, in 64 AD, most of Rome was destroyed in the Great Fire of Rome, which many Romans believed Nero himself had started in order to clear land for his planned palatial complex, the Domus Aurea.  He is infamously known as the Emperor who “fiddled while Rome burned” and as an early persecutor of Christians.

Part 2 has been published !

2 thoughts on “O’Brien Coin Guide: Roman Emperors and their Coins, Part I”