It may come as a bit of a surprise to many that although Celtic coins have not (yet) been discovered in Ireland, there have been a lot of Roman and Anglo-Saxon coins found – especially the latter.  Conservative Irish historians have always said the Romans never got here but they rarely even mention the Anglo-Saxons in the Early Medieval context.  We also see modern cartoons and paintings of Vikings with ‘horned helmets’ but, although the Vikings never wore them, the Anglo-Saxons certainly did.  Has this fact been distorted over a long period of time and remains with us via a sub-conscious memory manifesting itself in our rich oral tradition of story-telling ?

The history of Anglo-Saxon coinage spans more than five centuries, from the end of Roman rule in Britain in the 5th century, down to the death of Harold Godwinson at the Battle of Hastings on 14 October 1066. It can be divided into four basic phases:

From the 9th century, monarchs and their governments gained greater power over the control of coin production, and the designs used by different moneyers became standardised.

Towards the end of the reign of King Edgar, there was an important ‘reform’ of the Anglo-Saxon series and it inflluenced the design and production of English coins until the reign of Henry II – the Norman king that oversaw the invasion of Ireland in 1169.

Previously, the same type was used throughout the country but die production devolved to a number of regional die-cutting centres which distributed dies to nearby, smaller mints. Even within the nine-month reign of Harold II in 1066 coins were struck with a new design in his name at forty-eight mints.  Now, just one mint, controlled all of the others.

Around seventy places in England (and in Wales under the Normans) were active as mints during this period, ranging hugely in size and productivity: the largest was London, though York and Lincoln remained important throughout the period, and other major mints included Winchester, Norwich and Stamford.

At the other end of the scale are places that were never important mints in the Anglo-Saxon period and are little more than villages, hillforts and market towns today, including Melton Mowbray, Milborne Port, Castle Gotha, Cadbury Castle and Dunwich. Mints of this kind were often only active during short periods, such as a number of ’emergency’ mints set up during the reign of Æthelred II because of Viking depredations.

This first type, usually known as the First small cross or Reform type, remained in currency for Edgar’s last years, the whole of Edward the Martyr’s short reign and even into the first years of Æthelred II, who came to the throne in 978/9 AD. 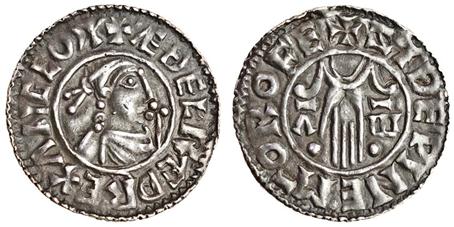 Aethelred II, Type 4 penny – Crux penny, Moneyer, Beohrtsige of Winchester. These are the equivalent to Hiberno-Norse, Phase I (Class A) that Sihtric ‘imitated’ between 996-1001 in Dublin.

Aethelred II, Type 5 penny – Long Cross penny, Moneyer, Eadmund of London. These are the equivalent to Hiberno-Norse, Phase I (Class B) that Sihtric ‘imitated’ between 1002-1008 in Dublin.

Aethelred II, Type 6 penny – Helmet type penny, Moneyer, Manna of Thetford. These are the equivalent to Hiberno-Norse, Phase I (Class C) that Sihtric ‘imitated’ between 1009-1011 in Dublin.

Aethelred II, Type 7 penny – Last small cross penny, Moneyer, Fastulf of Thetford. These are the equivalent to Hiberno-Norse, Phase I (Class D) that Sihtric ‘imitated’ between 1011-1016 in Dublin.

Cnut (1016-1035) Type 2 penny, helmet type, Leofinc of Lincoln, helmeted bust l. These might be the equivalent to Hiberno-Norse, Phase I (Class F) but it is thought that Sihtric did not issue coinage of this ‘imitative type’ after 1018 in Dublin. About the year 1020, Dublin stopped minting of coins in direct imitation of the contemporary English issue. The mint in Dublin appears to have reverted to minting coins in imitation of the Long Cross issue of Aethelred II – these new coins are Hiberno-Norse, Phase II

Numismatists have sometimes tried to discern a very rigid system of organisation in the late Anglo-Saxon coinage: one, Michael Dolley, believed that until the death of Cnut in 1035, each type lasted six years, with a few exceptions – such as the Last Small Cross type at the end of Æthelred’s reign – lasting longer under very unusual conditions.  Recently, numismatists have begun to question the validity of this strictly ‘sexennial’ issue theory.

These coin (Anglo-Saxon, Phase 4) types are commonly found in Ireland, although the reason for them being there is hotly debated.  The prevailing view is that the Vikings brought them to/from Ireland to facilitate trade, although a lot of them seem to have been found in native Irish held lands.

The first Irish coins were the Hiberno-Norse, Phase I coins produced by the Dublin Vikings under Sihtric.

Hiberno-Norse, Phase I, Class A Penny, blundered legends but vestiges of the royal name of Æthelred and the Dublin mint-signature 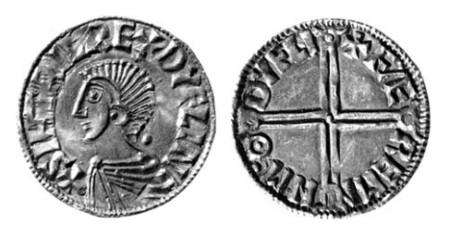 Hiberno-Norse, Phase I, Class B Penny, Long Cross in the name of Sihtric

Vikings in other places had been copying / imitating the silver pennies of Aethelred, including those at York and the first native-produced coins of Denmark and Sweden were also Anglo-Saxon imitations.

Mints located in the old Danelaw, like York and Lincoln, contained a preponderance of moneyers with Scandinavian names, whilst one sometimes comes across moneyers all over the country with continental names, or even more exotic names in Old Irish

The table below contains those moneyers with Old Irish names