(Julian dates have been adjusted to modern time frame)

The Irish Uprising of 1641 was a long-term result of the “plantation” policy of Tudor and Stuart monarchs under which Ireland was aggressively colonised by Protestant settlers from England and Scotland. From the mid-16th century, Irish landowners were dispossessed to make way for the settlers and a vicious cycle developed whereby rebellion against the English government was followed by further dispossession of rebels’ lands as punishment.

The displacement of the native Irish was compounded by the threat to the Roman Catholic church in Ireland. English Protestants dominated the government of Ireland and Catholics were barred from holding state office. The Irish Parliament was subservient to the English Parliament under a late-15th century statute known as Poynings’ Law, and during the early 17th century,

However, the native Irish population remained devoted to Roman Catholicism, as did the Anglo-Norman “Old English” aristocracy that had existed in Ireland since medieval times. 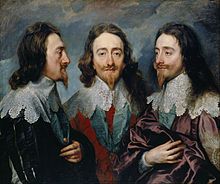 Charles I like his father before him indulged the Catholic landowners not out of religious belief but out of greed. The Gaelic people were a good source of income for the throne which in turn helped pay for the defence against a possible invasion from the Spanish.

The severity of the administration of Sir Thomas Wentworth, Lord Lieutenant of Ireland from 1632 to 1640, antagonised all parties in Ireland.

Thomas Wentworth, 1st Earl of Strafford, by Sir Anthony Van Dyck (died 1641), National Portrait Gallery, London. Wentworth was appointed Lord Deputy of Ireland in 1632 and his main purpose, openly proclaimed, was to rule Ireland well in order to supply men and money to the King. He would make the country prosperous in order to wring from it abundant taxes for his sovereign; but he aimed at its entire submission and the transference of what remained of Irish soil to English owners. And so well did he succeed that he was able to boast at the end of his term of office that he had left the country prospering, its debts paid, its revenues increased, the army paid and disciplined, the poor relieved, the rich awed, and justice done to all alike. This said, his disdain of the Irish, his ruthless policies in overseeing the new plantations in Ulster, Wexford, and Longford, plus his extension of these into Connacht drove the Irish into open and uncontrolled rebellion in 1642