Amongst the rarest coin issues of the turbulent times that covered the Wars of the Three Kingdoms are the gold pistole and double-pistole of 1646. These are the only gold coins struck and circulated in Ireland. They were produced by Dublin goldsmiths Peter van Eindhoven and Gilbert Tonques, on behalf of the Duke of Ormonde, as authorized by a warrant dated 29 July 1646.

Why are they known as Pistoles?

The most common question I have heard over the years is “why did the authorities in Dublin produce a foreign-named coin?” Another question is “if the weights do not precisely correspond to these foreign pistoles, why were they issued at these weights?”  Michael Dolley, one of the most accomplished of modern Irish numismatic experts went into great detail in his paper for the British Numismatic Society in 1966.

Dolley was of the opinion that 3 of these Anglo-Irish pistoles were equal to 2 English or Scottish ‘unites – the standard gold unit at that time. Furthermore, he opined that the small discrepancy in the actual gold content – not easily distinguishable by merchants or traders – ensured that the Dublin goldsmiths did not lose out when the coins were assayed later.

This would put the Anglo-Irish ‘pistoles’ at well below the weight of the Spanish real d’oro and the French Louis d’Or – but why?

The Dublin garrison comprised a mixture of English-born citizens and Irish-born descendants of Anglo-Norman stock. There would have also been an element of Irish natives who were doing well in ‘the trades’ and who feared a Confederacy takeover spelled financial ruin for them. However, there was a genuine fear amongst the authorities in Dublin that some of the (for now) Royalist troops in Dublin might declare for Parliament, or defect to the Irish Confederates if they were not paid.

Dublin was holding out but militarily, the Royalists and the Scottish Covenanters were experiencing a series of reversals in Ireland during the year of 1646.

By September 1646, the combined Confederate armies of Leinster and Ulster would besiege Dublin itself.

Their strategy was a clever one. Ormonde and his associates were very careful not to call these ‘pistoles’ coins – they preferred the term ‘pledges’ or ‘peeces’ (sic) when they spoke about the new gold. Although the two new coins stated that they contained 4 dwt. 7 gr. (equivalent to 103 grains) and 8 dwt. 14 gr. (equivalent to 206 grains), respectively, they actually contained 77-85 grains and 154-170 grains of pure gold, respectively.  Strictly speaking, they had issued ‘debased’ coins and were cheating the traders but, from a pragmatic viewpoint, gold was trading at a premium (as always, in times of war), so the goldsmiths had a significant challenge to overcome.

In other words, the actual gold content of three of the best/heaviest Ormonde ‘pistoles’ was roughly equivalent to two English or Scottish unites, so that a goldsmith could be certain that he would not be hurting himself if he obliged a customer by letting him have three of the ‘pistoles’ for two unites.

To a customer (under the false impression that an Ormonde ‘pistole’ was equal in value to a Spanish real d’oro or French Louis d’Or such a kindness might seem a very real favour, since three of the foreign gold coins would seldom be exchanged for two unites – the discrepancy in the actual gold content here amounting to some 26 grains.

The Ormonde Pistole might have looked ‘as rough’ as the Spanish pistoles (which were still manually produced with hammer and dies) but the French Louis d’Or was a new ‘milled’ coin produced by machine at the Paris Mint. Small wonder so many of the latter ended up in the Dublin goldsmiths’ melting pots.

Pistole is the French name given to a Spanish gold coin in use in 1537; it was a double escudo, the gold unit. The name was also given to the Louis d’Or of Louis XIII of France, and to other European gold coins of about the value of the Spanish coin.

The mechanization of the minting of coins from precious metals in France made possible the creation, in 1640, of the Louis d’or, named after King Louis XIII (reigned, 1610–43), who first introduced the coins. This series of gold pieces was part of a reform that changed the minting method from hammered coinage to a more precisely milled and weighed coinage.

How many were in circulation?

The sum in French pistoles, having a nominal value of 13s. 4d., could have been equivalent to something in excess of 5,000 gold coins quarterly. If, indeed, the issue of August 1646 was to last for a period of six months, then at least 10,000 Ormonde pistoles would be needed, a sum which certainly seems to have been sent over by Henrietta Maria probably at the behest of the king during the summer of 1646.

In another account from the Ormonde MSS.,3, there is a full account of the monies paid out to a Mr Lane. Because of its importance in relation to the present inquiry it is here transcribed in full. 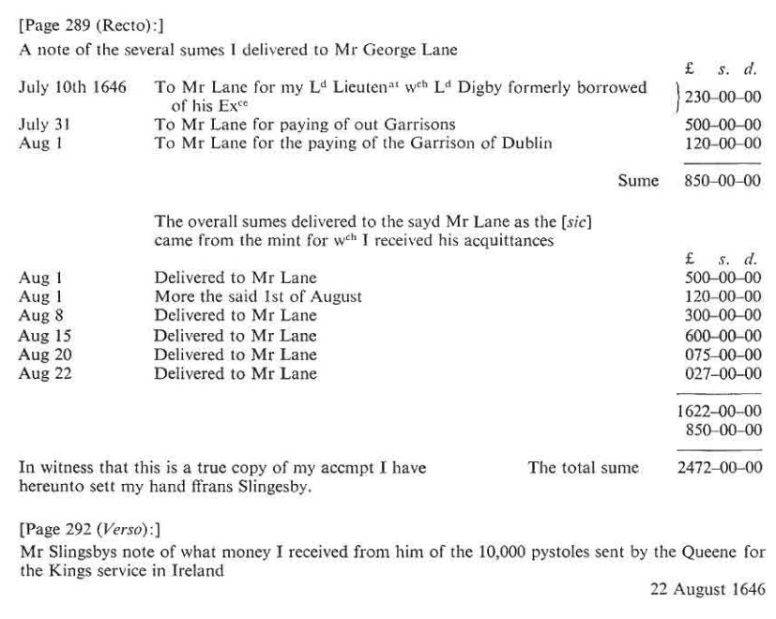 If, a single Ormonde ‘pistole’ is reckoned at one merk (13s. 4d) then from the account above it would appear that at least 2,433 pieces, 4 possibly more, were paid out to Mr. George Lane alone, as agent for military expenses. But this is most unlikely to be the whole issue nor does it necessarily include any strikings of Ormonde ‘double pistoles’.

Everything points to the issue in February following being much smaller; and the probability is that not more than £20,000 in all was struck, or approximately 25,000 pieces from seven or at the most eight dies.

The goldsmiths, at 6d. each per pounds-worth struck, would appear to have done very well.

Why are they now so rare?

Being of 19 carat gold, they were substantially below the gold content of the coins they imitated, therefore the Dublin goldsmiths and their friends would have been very reluctant to export them for melting. It seems likely that they were exchanged for gold unites at a rate of 3 for 2 (for the better examples) or 5 for 3 (for the lighter examples) by the Dublin goldsmiths themselves.

The National Museum of Ireland has 7 genuine ‘pistole’ specimens in its cabinets.

Die varieties of the Ormonde Pistole

Five die varieties were identified by William O’Sullivan in 1963 from the 7 specimens in the cabinets of the National Museum of Ireland. They are listed as follows in his paper to the BNS :-

There are seven specimens of the pistole in the striking of which five dies were used.

Across, 4: dwtt. 7: gr: within a plain inner and a beaded outer circle. The pellets in colon after 4 are further apart and thicker than those in the other colons. Letter D is shaped like a figure 9 with the terminal of the loop protruding horizontally to right almost touching W and has an arched horizontal terminal to left below as a base. Letters tt are crossed by a long horizontal bar protruding well out on left and slightly on right. The terminal of the loop of the letter G does not protrude to right.

Across, 4: dwtt. 7: gr: within a plain inner and a beaded outer circle. The top pellet of colon after 4 is slightly to left of lower. Letter D is shaped like a figure 9 with the terminal of the loop protruding horizontally to right, but finishing farther from the W than in No. 1 and has the horizontal terminal at the base flatter than in No. 1 and turned down on the left. The horizontal bar on the letters tt protrudes less on left than in No. 1 and is thicker and more curved upwards on left. The terminal of the loop of letter G protrudes to the right. There is a flaw in the die showing a line from the foot of 4 to the colon after 7.

Across, 4(: dwtt.) 7(:) gr: within a plain inner and a beaded outer circle. Letter W is shaped like a retrograde N and a triangular D ligated. The two dots of the colon after W touch the inner circle and slant downwards to right. The colon after r is under the final limb of W.

The parts within parentheses are not visible because of rubbing and are presumed.

Across, 4(:) dwtt. 7(: g)r: within a plain inner and a beaded outer circle. Letter W is shaped like a retrograde N and a D with round back ligated. The colon after r is to the right of the final limb of W.

The parts within parentheses are not visible because of rubbing and are presumed.

Only three of these coins are available to the public – the rest are held in museum collections and will (most likely) never appear for sale. Two out of the three available coins recently sold at auction – one in London and the other in New York.

Duke of Ormonde’s gold coinage of 1646-7, Pistole, Dublin, undated, stamped 4dwt 7grs both sides – this example is thought to have originally come from the Carruthers collection (formed in the 19th C)