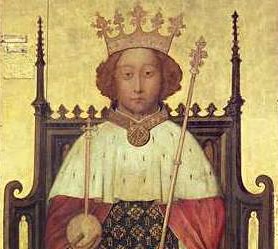 By the time Richard II became king, the Irish lordship was regularly requiring support from England to meet its critical military and financial needs.

Less warlike than either his father or grandfather, he sought to bring an end to the Hundred Years’ War that Edward III had started.

The 27-year-old de Vere was already earl of Oxford, but his landed inheritance was an inadequate and depleted holding in Essex, and he had no pre-existing connection with the country of which he was now not merely duke but also full palatine lord – most of the previous incumbents already held land and/or titles there, or their wives had Irish connections.

In these circumstances, amid fears of the lordship’s complete collapse, Richard’s first Irish expedition (1394-1395) was an extraordinary diplomatic success, achieved mostly via the threat of military force, as opposed to actual military success, i.e. defeating an enemy in battle. The Irish princes – realising they could not face Richard in open battle, mostly chose not to fight but to submit. This allowed them to keep their titles and lands, in addition to causing no collateral damage to their military strength or their property.

Ireland had now entered the international arena, and England was confronted in her foreign affairs, for the first time, by ” the Irish Question.” Richard II – vain, impulsive, and ambitious – had unwittingly become a candidate for the Imperial Crown of the ”Holy Roman Empire” by right of his wife. But the German electors and princes thought but little of the power of the English King; they needed a strong Emperor to meet the menace of the Turks, who were now in Europe; and they taunted Richard with the fact that he was unable to hold Ireland, a primitive backwater on the edge of Europe – over which he claimed dominion.

Richard II issued silver coinage in England but chose not to do so in Ireland. The Anglo-Normans and native Irish would have used the coinage of his forebears

Thus, Richard arrived in Ireland in October 1394 with a substantial force – approx. 7,000 men at arms. Although his primary objectives were military and political, but he also intended administrative and financial reforms, the presence of the king in Ireland provided an unprecedented opportunity to establish peace between the different interests in the country.

Although little evidence survives about the Anglo-Norman Lordship of Ireland’s government and administration in the 1390s, occasional references show that in the following years Richard attempted, for a time, to maintain his expeditionary settlement.

A major consequence of Richard’s intervention in Ireland was to marginalise the royal lieutenant, Roger Mortimer, who was doubtless counting on royal help to recover some of his family’s authority in Ulster.