Two and a half years ago I wrote an article designed to generate discussion on whether (or not) Irish metal-detectorists were saints or sinners. I had hoped to get more opinions from the professionals involved in Irish archaeology – from both sides of the border – but they have remained quiet.

An uneasy three-way ‘stand-off’ exists between the professionals and the hobbyists and the detectorists. A legal paradox also exists, i.e.

The result is that the Irish public are either confused or ignorant re the legal issues. Collectors are terrified that their collections, built up over decades, might be confiscated in their entireity if just one coin was deemed suspect by the National Museum of Ireland. In one instance, it was alleged that even the legal tender coins in a suspects purse were confiscated in a joint Garda-NMI search of a house. Collectors are understandably worried about expressing their concerns in public.

Clearly a gap in knowledge and polarised behaviour/intent does exist. For example, it is accepted by all sides that some detectorists are just criminals intent on illegally removing archaeology and selling it for profit. Sadly, a criminal element exists in most professions and in most areas of society.

The latest revelation from the NMI concerns a well-intentioned donation from an illegal finder who (probably) used a metal detector to find and illegally remove important Irish archaeological artefacts from (it is thought) several different sites.

However, there are any positive attributes known to exist in organised, regulated metal detecting – as can be seen from PAS in the UK.

For those not familiar with PAS:

The British Museum, in conjunction with academics at Oxford, Cambridge and other educational institutions came up with the idea of a voluntary scheme whereby finders of treasure could record and report their finds in a scientific way – thus not losing valuable contextual information.  They developed a process whereby :-

More than a million archaeological objects recovered by members of the public from across England and Wales have been recorded on the Portable Antiquities Scheme (PAS) database since 1997.

Meanwhile, another problem – much more urgent – has arisen. During the building boom, there was a record amount of road and houses building. But when the recession hit and some companies folded, the money dried up.

As a result, material was left sometimes unprocessed in warehouses in the Republic of Ireland and in other parts of the UK, and storage is now paid by the private companies.

“private companies can not be expected to pay for the cost of storing the items indefinitely.”

“It cost millions of pounds to dig the material out of the ground, but because of storage problems, neither students nor the general public can access them.”

It has been reported that;

“At the warehouse in Kells, about a third of the hundreds of boxes of exhibits came from archaeological digs in Northern Ireland in recent years.” 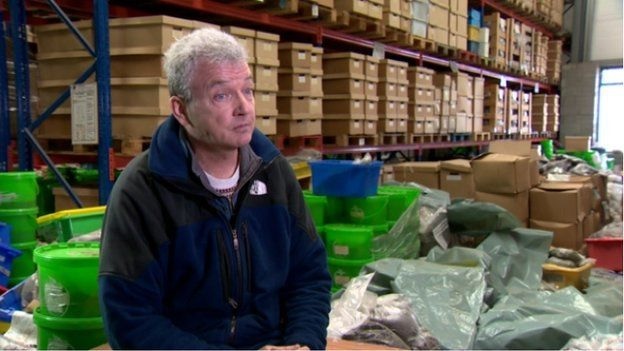 Eoin Halpin said “fantastic” archaeological artefacts dating back over 6,000 years had been left in storage

Presumably, the rest of the stored, unclassified artefacts were excavated south of the border. I also look at the above photo and wonder how many ‘previously undiscovered’ coins there might be in there???

My proposal is simple:

This proposal is aimed at people who might be tempted to use metal detectors but would be better utilised as part of an initiative to reduce our huge stockpile of unclassified archaeological artefacts that are disintegrating in potentially unsuitable temporary storage.

Graduates of this initiative might be the future leaders of an Irish PAS.

What do YOU think?

If you like it, or have additional ideas / constructive criticism, please do get in touch.