Within days of being appointed Minister for Finance in 1919 Collins set about raising the funds necessary if Dáil Éireann was to fulfill its stated ambition of providing an alternative government to the British one that was operating from Dublin Castle. He announced a loan issue on behalf of the Dáil.

During his period in Stafford jail before transfer to Frongoch, Collins was located in a cell next to J.J McElligott – who, together with Joseph Brennan (financial advisor to Collins during the Treaty negotiations) would go on to dominate Irish fiscal and monetary administration in Ireland’s Dept. of Finance for the next 30 years.

Signatures of Joseph Brennan & J.J. McElligott on a £50 note

Commonly known as the ‘bond drive’, the First External Loan was launched in New York on 17 January 1920. As ‘President of Ireland’, Éamon deValera received the freedom of the city from Mayor Hylan, who purchased the first bond of the issue in a ceremony open to the press.

De Valera explained the terms of the loan to the journalists in attendance, using the language of statehood while taking care not to misrepresent his case.

‘It will be distinctly understood by each subscriber to the loan that he is making a free gift of his money. Repayment of the amount subscribed is contingent wholly upon the recognition of the Irish Republic as an independent nation.’

To avoid accusations of fraud, the Dáil’s bonds were called ‘bond certificates’, which were exchangeable for bonds of the Irish Republic once that entity had gained international recognition.

The Dáil launched three successful bond issues in the course of the war of independence:

A fourth bond drive, in Argentina, was launched in late 1921 but was cut short by the signing of the Anglo-Irish Treaty. 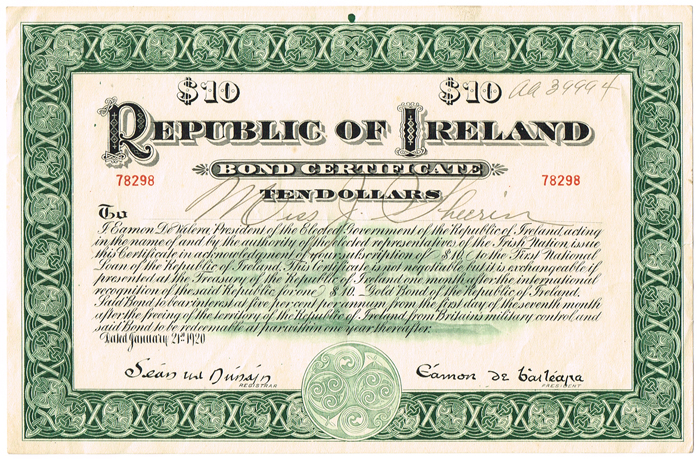 The bond drive closed for new subscriptions on 14 October 1920. According to historian Francis Carroll, its $5,151,800 in proceeds was the largest amount ever raised by the Irish movement in America. Leading the pack was New York, which raised a whopping $1,453,014, representing some 26% of the total. Manhattan alone subscribed over $600,000 !

The American bond certificates were sold in denominations of $10, $25, $50, $100 and $10,000. The purchaser would receive a certificate that could be exchanged at par for a gold bond paying 5% interest one month after the Republic had received international recognition (Carroll 2002:17). The monies collected were made payable to the three Trustees of Dail Eireann – Eamon De Valera, James O’Mara and Bishop Michael Fogarty of Killaloe.