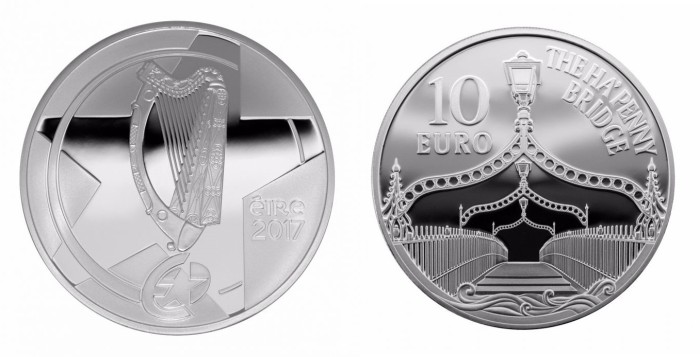 The 2017 €10 silver proof coin pays tribute to one of Dublin’s most iconic landmarks, the Ha’Penny Bridge which was officially opened in May 1816 and replaced a ferry service. It was the only pedestrianised bridge in Dublin which connected the north and the south of the city for 184 years.

For the first 100 years after it opened a man named William Walsh was given the ownership of the bridge and charged locals the price of a Ha’Penny to cross. This is where one of the city’s most memorable landmarks, got its name from, prior to this it was known as the Liffey Bridge, the Wellington Bridge or the Iron Bridge.

The Central Bank of Ireland has participated in the European Silver Programme each year since 2006. The current theme “Great Ages of Europe” is running from 2016-2020, and attempts to express the uniqueness of Europe through its art history.

The first coin was presented to Ardmhéara Mícheál Mac Donncha, first citizen of Dublin, for display at the Mansion House. As the Ha’penny Bridge is such an iconic landmark of Dublin and to the to mark their achievements in 2017, a coin was also been specially presented to:

History of the Ha’penny Bridge:

Before the Ha’penny Bridge was built there were seven ferries, operated by a William Walsh, across the Liffey. The ferries were in a bad condition and Walsh was informed that he had to either fix them or build a bridge. Walsh chose the latter option and was granted the right to extract a ha’penny toll from anyone crossing it for 100 years.

Before the Ha’penny Bridge was built in 1816, Grattan Bridge – between Capel Street and Parliament Street – was the lowest crossing point on the Liffey. Completed in 1874 to replace an earlier narrower structure. The previous crossing had featured a huge statue of King George I was erected on a pier built on the upstream side of the bridge in 1722.

Initially the toll charge was based, not on the cost of construction, but to match the charges levied by the ferries it replaced. A further condition of construction was that, if the citizens of Dublin found the bridge and toll to be “objectionable” within its ﬁrst year of operation, it was to be removed at no cost to the city. 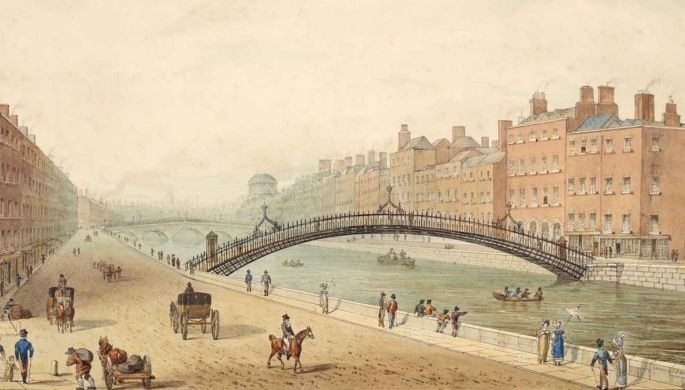 A watercolour drawing by Samuel Frederick Brocas of the Ha’penny Bridge, dated 1818, looking from Aston Quay across to Bachelors’ Walk and downriver toward Grattan Bridge and the Four Courts. The original is stored in the Archives of the National Library of Ireland

The bridge has three lamps supported by curved ironwork over the walkway. In 2001 the number of pedestrians using the bridge on a daily basis was 27,000 and, given these traffic levels, a structural survey indicated that renovation was required.

By day or by night, in sunshine or snow, Dublin’s Ha’penny Bridge is a tourist icon that has to be crossed at least once on your visit to Dublin. It is one of the most photographed places in Dublin.