Jonathan Swift was a man of many talents and he is known to us in a variety of guises. To the historian, he is the author of thinly disguised, anonymous political pamphlets that severely criticised the government of the day – Drapier’s Letters.

To the student of Irish numismatics, he is the author of that letter (by Messr. Drapier) that criticised Woods’ halfpenny so severely, that it was eventually taken out of circulation and the coins sent to the American colonies where they were crying out for a circulating currency – no matter how under-weight (which it wasn’t). He is also the main subject on the Irish (B Series) £10 banknote that circulated from 1976 to 1992.

To the student of Anglo-Irish literature, however, he is the genius that created A Tale of a Tub, A Modest Proposal and, of course, Gulliver’s Travels – his best known and single greatest work. Gulliver’s Travels recounts the voyages of Lemuel Gulliver to four exotic lands where he encounters a series of ironic illustrations of humanity.

This new collector coin has been launched to mark the 350th anniversary of Swift’s birth in 1667. Educated at Trinity College and later appointed Dean of St. Patrick’s Cathedral in Dublin, Swift is regarded as one of the foremost prose satirists in the English language.

Given its full title of “A Modest Proposal for Preventing the Children of Poor People from Being a Burthen to their Parents, or the Country, and for Making them Beneficial to the Publick,” his tongue-in-cheek proposal, in effect, was to fatten up these undernourished children and feed them to Ireland’s rich landowners.

This satirical hyperbole, or figure of speech, mocked heartless attitudes towards the poor, as well as the British policy toward the Irish in general. The primary target of Swift’s satire was the rationalism of modern economics and the growth of rationalistic modes of thinking in modern life at the expense of more traditional human values.

Who was Jonathan Swift?

Born on the 30th November 1667 in Dublin, Ireland, Jonathan Swift was the second child and only son of Jonathan Swift Sr. and his wife Abigail Erick. His father, and family beforehand, were natives of Herefordshire in England. His father accompanied his brothers to Ireland to earn their living in law after the destruction of their family’s estate during the English Civil War, as their father supported the royalist cause.

It was perhaps inevitable that young Jonathan would look to make his mark in the literary world since Swift’s extended family had several interesting and very impressive literary connections.

Swift also studied for his M.A. before the Glorious Revolution of 1688 which brought to the English throne Princess Mary, daughter of King James II, and her husband, the Dutch Prince Willem of Orange, jointly as King William III and Queen Mary II.

Swift, therefore, spent much of his early adult life in England before returning to Dublin to serve as dean of St. Patrick’s Cathedral in Dublin for the last 30 years of his life. It was during this time in his life when he would write most of his greatest works which he would be best remembered for.

Swift is widely acknowledged as the greatest prose satirist in the history of English literature and, ironically, he wrote much of his best work anonymously or under several different pseudonyms.

In 1704, Swift anonymously released A Tale of a Tub and The Battle of the Books, and although widely popular with the masses, it was harshly disapproved of by the Church of England. Ostensibly, it criticised religion, but Swift meant it as a parody of pride, not worship.

Notwithstanding, his writings earned him notoriety as well as a reputation for satire and in some cases insult in London. With the rise of the Conservative Party, who formed the government in 1710, Swift was asked to become editor of The Examiner, their official newspaper.

Before the fall of the Tory government, which occurred with the arrival of Prince-elector George of Hannover, who succeeded Queen Anne in 1714, Swift hoped that his services would be rewarded with a church appointment in England. However, Queen Anne, of whom it could be said was a bitter enemy, had appeared to have taken a dislike to Swift and thwarted these efforts by making it clear that Swift would not have received the preferment if she could have prevented it.

With the return of the Whigs, the best position his friends and supporters could secure for him was the deanery of St. Patrick’s, which, was not in the Queen’s realm of a gift. His best option at that time was to leave England and return to Ireland.

In 1742, Swift suffered a stroke which left him unable to speak and aside from his lack of vocal communication, he was realising his worst fears of becoming mentally disabled. 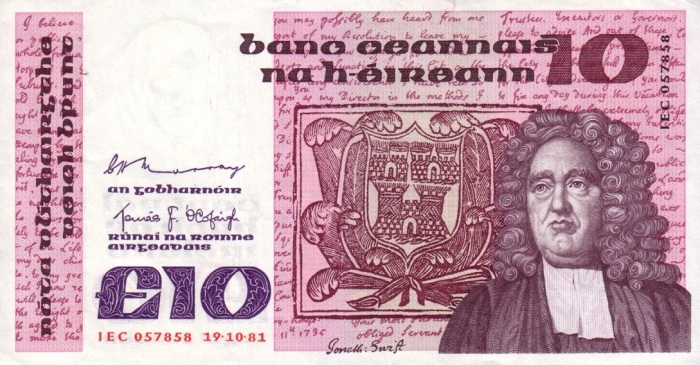