The one euro coin (€1) is the new basic unit of currency for the Euro Zone – an area where a common currency (the Euro) is used.  This new economic area was implemented on 1st January 2002 when 12 national currencies of varying values were replaced with new coinage and banknotes.  The rates of exchange were fixed in 1999 and citizens had a short period of dual currencies to get rid of their old money, i.e. you could pay for your goods/services in either the new currency or the old, but you always got your ‘change’ in the new currency.

The €1 coin is bi-metallic, i.e. made of two alloys: the inner part of cupro-nickel, the outer part of nickel-brass.

Since its introduction in 2002, €1 coins have been produced every year by Ireland. 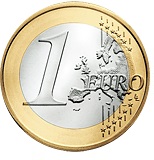