The 1642 ‘Lords Justices’ issues were followed in 1643 by a larger (fourth) emergency issue of better made, but still crude, silver coins. These are collectively known as ‘Ormonde Money’ since they were issued by the Lord Justice, the Earl of Ormonde (James Butler) some time between 1643-1644.

These coins were almost exclusively made from silver plate, cut and struck into a number of denominations with simple patterns including their value in ‘old style’ Roman numerals, where ‘4’ is written as ‘IIII’ and not the modern style  ‘IV’ as seen on many modern coins. Sometimes, on particularly well-preserved examples, one can see the original patterns on the silver plate, and, very occasionally, a contemporary hallmark from the Dublin Silversmith’s Guild.

The heavier crowns and halfcrowns turn up more frequently at auction and tend to be better preserved than the smaller denomination (and lighter) pence coins – presumably the lighter coins were circulated more, show more ‘wear and tear’ and, therefore, were more likely to be melted down at a later date. The crowns and halfcrowns also show more die varieties due to more specimens being available for study.

Ormonde Twopence (2d, but also known as a Half-Groat) 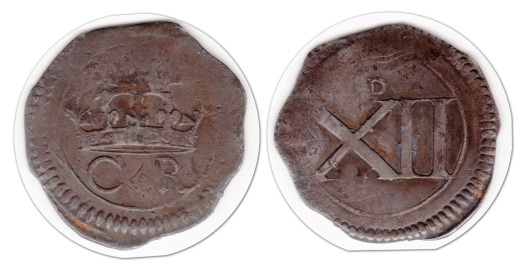 Ormonde Halfcrown. S.6545. Obv. Crown above C and R, a line circle around, and a somewhat crude blunt toothed outer border. Only cross of crown touches the inner line circle. Only the tail of the trailing R crosses the circle. A faint triangular pellet divides the C and R. The C has a near Roman top seraph, and no bottom seraph. Rev. Huge bold II, height 15.0mm, and shorter VI, height 11.3mm. All four corners of the IIVI cut across the inner line circle of 25.5mm diameter. Minute central pellet before V. An almost snakelike S with almost parallel Roman seraphs is centered above the II, and almost bisected by the line circle with bottom of top seraph of S just touching the outside of the inner circle. Well formed D, height 3.6mm, with a longer top seraph than bottom seraph, is above right side of V and closer to circle than to the V. Struck on an unusually round sterling plate flan, still showing part of original silver detail on obverse 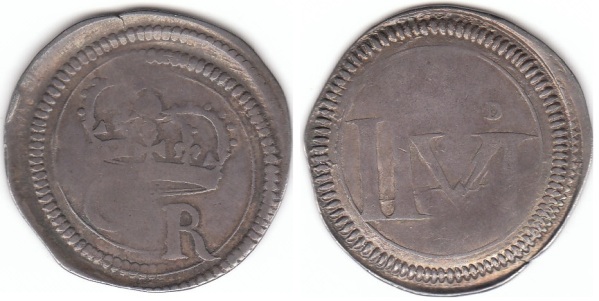 Ormonde Halfcrown Obv. Double Stuck Die, 14.65g. Obv. struck twice, the second strike being 8.5mm lower than the first, resulting in a strongly doubled outer blunt toothed circle at the top, and a doubled crown. The C appears from the first strike higher on the left, and the R appears lower from the second. Any pellet between the C and R is no longer visible. Rev. appear similarly modified as the above. Inner line circle is 27.5mm. The tall bold II is slanted down on the top to the left to about 13.5mm, while the VI remains about 11.3mm. height. The corners of the IIVI touch but do not cross the line circle. The same die crack across the bottom third of the IIVI is evident and appears about the same, as on the coin immediately above. The area of the S is worn smooth. The D is the same petite size D, height 2.4mm., as above, but now has equal length seraphs top and bottom. The left stand of the V appears thinner, and upon inspection, has been reduced, indicating this die is the third working of the same die as the above two coins. Struck on a cut fairly round sterling plate flan

Superb Ormonde Crown. Obv. Crown above C and R, a fine line circle around, and a toothed outer border. Cross and top corners of crown and curled tail of R break circle. Diamond shaped pellet surrounded by 4 tiny pellets, above, below, and to sides, all between C and R. C with protruding top seraph but no bottom seraph. Rev. Large V, within line border, well clear of line circle at bottom and touching upper left and barely clear upper right, surrounded by plain field and outer toothed border. Tiny diamond shaped central pellet within V, snake-like S with seraphs that only protrude outward, curled backward at bottom and forward at the top, a petite round pellet below, all well clear and below the line circle. Superbly struck on a round sterling plate flan, still showing much detail of the original silver plate. Not all specimens are this round, as they are usually crudely cut from silver plate 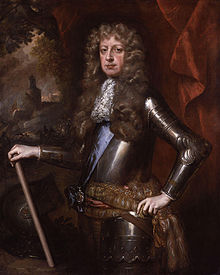 James FitzThomas Butler, 1st Duke of Ormonde, 12th Earl of Ormond, 5th Earl of Ossory, 1st Marquess of Ormond, 1st Earl of Brecknock KG, PC was an Anglo-Irish statesman and soldier, known as Viscount Thurles from 1619, Earl of Ormond from 1634 to 1642, the Marquess of Ormonde from 1642 to 1661 and the Duke of Ormonde from 1661 onwards. He was appointed commander of the Cavalier forces in Ireland and, from 1641 to 1647, he led the fighting against the Irish Catholic Confederation. Without actually changing sides, he found himself on the joint-Royalist-Confederate side in the fight against the Cromwellian conquest of Ireland. After a series of catastrophic defeats in this role, he lived in exile in Europe with King Charles II of England. Upon the restoration of Charles to the throne in 1660, Ormonde became a major figure in English and Irish politics, holding many high government offices, including his elevation to an English dukedom in 1682.

James Butler was the eldest son of Thomas Butler, Viscount Thurles and of Elizabeth, Lady Thurles, daughter of Sir John Poyntz of Iron Acton in Gloucestershire. His paternal grandfather was Walter Butler, 11th Earl of Ormond.

On the outbreak of the Irish Rebellion of 1641, Ormonde found himself in command of government forces based in Dublin. Most of the country was taken by the Catholic rebels, who included many of Ormonde’s Butler relatives and their followers.

In March 1643, Ormonde ventured his troops to New Ross, deep in the territory of the Catholic Confederation, and won a small but indecisive victory there (Battle of New Ross) before returning to Dublin.

In addition the Scots Covenanters, who had landed an army in the northeast of Ireland at Carrickfergus to counter the Catholic rebellion in that part of the country in early 1642, had subsequently put northeast Ireland on the side of the English Parliamentarians against the king; and the relatively strong Protestant presence in and around Derry and Cork City was inclined to side with the Parliamentarians as well, and soon did so.

Isolated in Dublin, with the king seeking ways to minimize his Irish troops, Ormonde therefore agreed to a “cessation” or ceasefire with the Catholics, which began in September 1643, by which the greater part of Ireland was given up into the hands of the Catholic Confederation (leaving only districts in the north, the Dublin Pale, an area around Cork City, and certain smallish garrisons in the possession of Protestant commanders).

Ormonde was faced with a difficult task in reconciling all the different factions in Ireland.

In 1644, he assisted Randall Macdonnell, 1st Marquess of Antrim in mounting an Irish Confederate expedition into Scotland. The force, led by Alasdair MacCollawas sent to help the Scottish Royalists and sparked off a civil war in Scotland (1644–45).

On 25 August 1645, Edward Somerset, 2nd Marquess of Worcester, acting on behalf of King Charles, signed a treaty in Kilkenny with the Irish Catholic Confederates without first airing the terms of the treaty with the Irish Protestant community.

On 28 March 1646, Ormonde, on behalf of the king, concluded another treaty with the Confederates which granted religious concessions and removed various grievances.

Ormonde then judged that he could not hold Dublin against the Confederates. In order to save Protestant Dublin – the bastion of English rule in Ireland – he therefore applied to the English Long Parliament for help and signed a treaty with them on 19 June 1647 giving Dublin into the hands of the Parliamentarians on terms which protected the interests of both royalist Protestants and Roman Catholics who had not actually entered into rebellion.

Commander of the Royal Alliance (Royalist & Confederates) in Ireland

Ormonde attended King Charles during August and October 1647 at Hampton Court Palace, but in March 1648, in order to avoid arrest by the Parliament, he joined the Queen and the Prince of Wales at Paris. In September of the same year, the pope’s nuncio having been expelled, and affairs otherwise looking favourable, he returned to Ireland to endeavour to unite all parties for the king.

However, despite controlling almost all of Ireland before August 1649, Ormonde was unable to prevent the conquest of Ireland by Cromwell in 1649-50. Ormonde tried to re-take Dublin in August 1649, but was routed at the battle of Rathmines. Subsequently, he tried to halt Cromwell by holding a line of fortified towns across the country

Ormonde, though desperately short of money, was in constant attendance on Charles II and the Queen Mother in Paris, and accompanied the former to Aix and Cologne when expelled from France by the terms of Mazarin’s treaty with Cromwell in 1655. 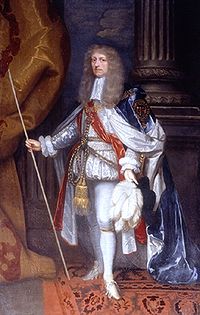 On the return of Charles II to England as king, Ormonde was appointed a commissioner for the Treasury and the navy, made Lord Steward of the Royal Household, a Privy Councillor, Lord Lieutenant of Somerset (an office which he resigned in 1672), High Steward of Westminster, Kingston and Bristol, Chancellor of Trinity College, Dublin, Baron Butler of Llanthony and Earl of Brecknock in the peerage of England; and on 30 March 1661 he was created Duke of Ormonde in the Irish peerage and made Lord High Steward of England, for Charles’s coronation that year. At the same time he recovered his enormous estates in Ireland, and large grants in recompense of the fortune he had spent in the royal service were made to him by the king, while in the following year the Irish Parliament presented him with £30,000. His losses, however, according to Carte, exceeded his gains by nearly £1 million.

On 4 November 1661, he was once more appointed Lord Lieutenant of Ireland, and busily engaged in the work of settling that country. The main problem was the land question, and the Act of Explanation was passed through the Irish parliament by Ormonde, on 23 December 1665.

He had great influence over the appointment of judges: while he naturally wished to appoint to the Bench men of legal ability, a record of loyalty to the Crown was also generally required.

In 1670, an extraordinary attempt was made to assassinate the duke by a ruffian and adventurer named Thomas Blood, already notorious for an unsuccessful plot to surprise Dublin Castle in 1663, and later for stealing the royal crown from the Tower.

The outrage, it was suspected, had been instigated by Buckingham, who was openly accused of the crime by Lord Ossory, Ormonde’s son, in the king’s presence, and threatened by him with instant death if any violence should happen to his father.

On 29 November 1682, an English dukedom was conferred upon him, and in June 1684 he returned to Ireland; but he was recalled in October in consequence of fresh intrigues. Before he could give up his government to Rochester, Charles II died; and Ormonde’s last act as Lord Lieutenant was to proclaim James II in Dublin.