Strictly speaking, “most” of the Lennox ‘patent’ Farthings are not part of the Irish coinage of James I but, since many turn up in Ireland (either as genuine finds, or as imports by collectors or dealers), they cause a lot of confusion due to their having a harp on the reverse. Also, this patent was carried through by no less than four patentees – the second (Lennox), third and fourth of which did produce farthings ‘authorised’ for use in Ireland upon continuation of the original patent first granted to Lord Harrington.

Due to a shortage of small coins, James I authorised John Harrington to issue tin coated bronze farthings in 1613, and three main types were minted – the last being a slightly larger copper farthing without the tin coating.

The Duke of Lennox became the Duke of Richmond, but died around 1624. Thus the Harrington and Lennox farthings date to the reign of James 1 (1603-1625). The patent title passed jointly to Ludovic’s widow Frances, Duchess of Richmond and Sir Francis Crane who had their patent re-affirmed by Charles I. These (subsequent) issues would be known as the Richmond Farthings.

Getting back to the topic at hand, the main varieties of the Lennox Farthings are as follows :- 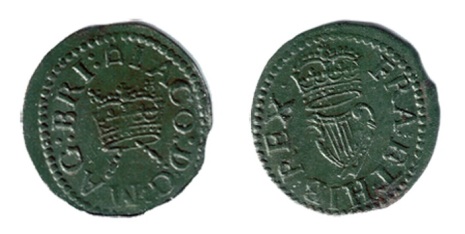 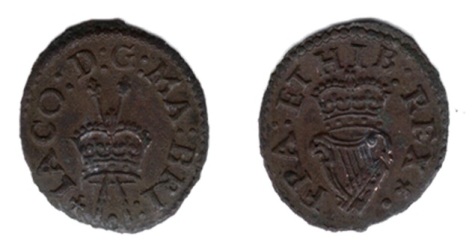 In line with the previous patent farthings, the Lennox Farthings included a series of Privy Marks which were an additional device to prevent / deter counterfeiting.

Who was Ludovic Stewart ?

Ludovic Stewart, 2nd Duke of Lennox and 1st Duke of Richmond (1574–1624), was a Scottish nobleman and politician. He was the son of Esmé Stewart, 1st Duke of Lennox, and his wife, Catherine de Balsac. From an Irish perspective, Ludovic is perhaps best known for his involvement in the Plantation of Ulster, where he was granted lands at Portlough in the Barony of Raphoe in County Donegal in 1608.

He also participated in the colonization of Maine in New England.

After the death of his mother, Ludovic returned from France and was taken to meet James VI at Kinneil House who issued instructions for the education of Ludovic. The young Duke was to remain in the king’s household under the care of Mr. Gilbert Moncreiff. 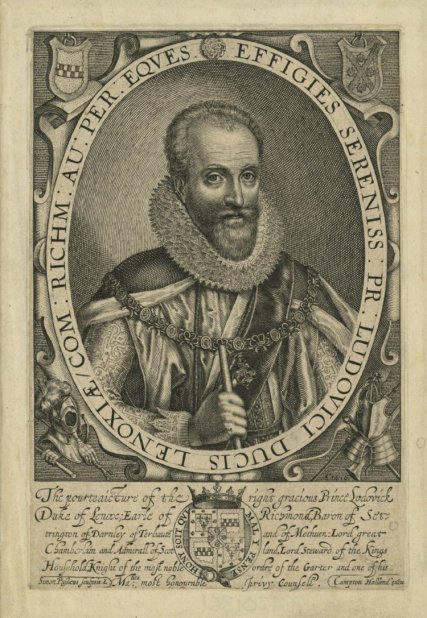