Anne was born in the reign of her uncle Charles II, who had no legitimate children – though it wasn’t for want of trying. Her father, the brother of Charles II and later to become James II, was first in line to the throne. His suspected Roman Catholicism was unpopular in England, and on Charles II’s instructions Anne was raised as an Anglican. Her father openly converted to Catholicism in 1675 and the scene was set for a massive political problem when he became king.

Anne (centre) and her sister Mary (left) with their parents, the Duke and Duchess of York, painted by Sir Peter Lely and Benedetto Gennari II. Their father went on to become James II and was extremely unpopular, given that he favoured a return to ‘absolute monarchy’ and was the first openly Catholic king of England in the post-Reformation period. Both of his daughters were raised in the Anglican faith.

When Queen Anne of Great Britain died in 1714, she was the last monarch of the House of Stuart which had succeeded the House of Tudor with the death of Elizabeth I in 1603.

Anne with her son Prince William, Duke of Gloucester, in a painting from the school of Sir Godfrey Kneller, c. 1694

Gloucester’s mother was estranged from her brother-in-law and cousin, William III, and her sister, Mary II, but supported links between them and her son. He grew close to his uncle William, who created him a Knight of the Garter, and his aunt Mary, who frequently sent him presents.

To show how each person’s claim was derived, their ancestors back to King James I (and VI of Scotland) – the first to occupy both thrones – are listed, without numbers. Eligible Protestants according to the Act of Settlement are noted in italics.

Charles I, King of England and Scotland (beheaded in 1649) 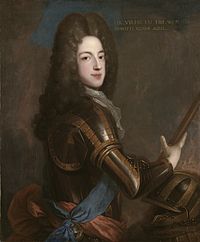 Anne’s half-brother and first in line to the throne, James Francis Edward Stuart (later known as the Old Pretender and leader of the Jacobite Rebellion)

The Jacobite cause had plenty of supporters:

No less than 55 Roman Catholic’s had a more senior lineage than the first potential Protestant successor at the death of Queen Anne. This had huge political implications for the future of the British monarchy.

Sophia, Electress of Hanover (d. 1714) designated heir according to the Act of Settlement (1701) 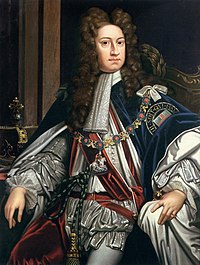 George Ludwig, the first Protestant in succession to the British throne at the death of Queen Anne

One thought on “The Succession Crisis of Queen Anne”