The rural counties of Leinster, Munster and Ulster were sparsely populated by Protestant settlers that had been given land in recent plantations. In many places, the Catholic tenants that had previously worked the farms were still in the locality and subsisted as landless outlaws (woodkerne, or tories). When rebellion broke out, some were very quick (and brutal) to exact revenge on their usurpers. Reports of the violence was greatly exaggerated in order to garner financial and military support from London. Many of the troops sent to Ireland, enraged by these reports, were only too keen to reciprocate. 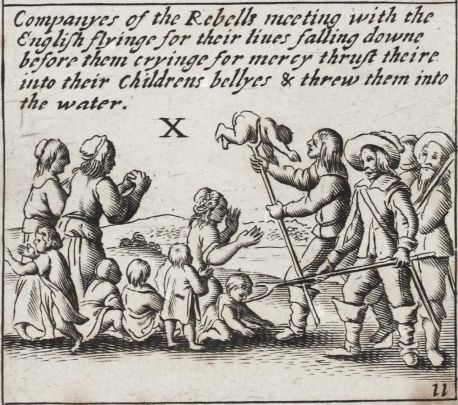 The 1641 Rebellion was particularly notorious for the atrocities committed by troops on both sides. Civilians were harshly treated and often executed on the spot. This woodcut, from Ulster, illustrates the general hysteria attributed the the propaganda.

The fortified towns of Bandon Bridge and Kinsale were important refuges for Protestant farmers and their families who were fleeing from the armies of the Catholic Confederacy. Although the two armies splintered under a variety of commanders, some of their number were left to besiege the so-called Southern Cities of Refuge – Bandon Bridge being one of these.

The situation was made even more complex by the splintering of the Protestant armies into those loyal to Parliament, and those loyal to the king – and, in 1649, when Charles I was beheaded, some of the Protestant forces even defected en-masse to the Confederate side. When Cromwell invaded Ireland, another series of defections in either direction occurred.

Scans of the original papers, maps and texts from these depositions can be viewed via the Trinity College Dublin website.

Bandon during the Great Rebellion 1641-52

The walled town of Bandon Bridge, circa 1620, shows the defensive nature of this important bridging point on the River Bandon

Richard Boyle was appointed Privy Councillor for Ireland in 1613.  That same year he bought the lease for the town.  At that time Bandon was under constant attack from the conquered natives.  As a result, in 1620 Richard Boyle began the construction of a wall around its perimeter.

So proud was Boyle of his accomplishment that in he remarked

“my town of Bandon-Bridge is more encompass than Londonderry… my walls are stronger and thicker and higher”.

The main town was entirely Protestant (enforced by an early by-law) but suburbs containing Irish households were to appear near the southern part of the town even before the walls were finished. By 1623 the suburb in Cloghmacsimon townland had acquired the self-explanatory name of Irishtown. Things did not stay so geographically definite for long.