The bronze Coinage of Queen Victoria was introduced in the year 1860, to replace the copper coinage first inaugurated by Charles II in 1672. This new alloy for coinage had several advantages over the old copper coins:-

But bronze is not as easy to strike coins in as copper, and the large number of die varieties found in this coinage is evidence of the great difficulties the Royal Mint encountered in coining in this metal. It is quite easy to understand that in the years 1860-61 there should be so many changes. 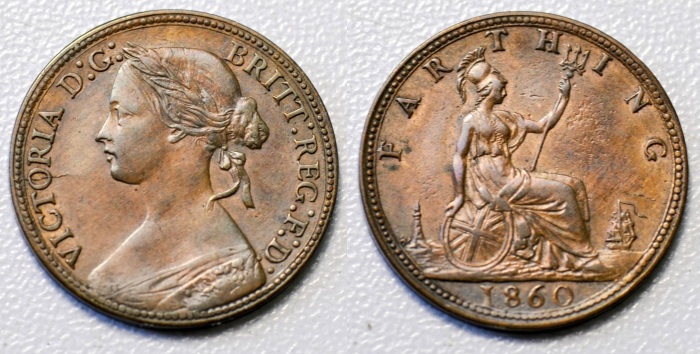 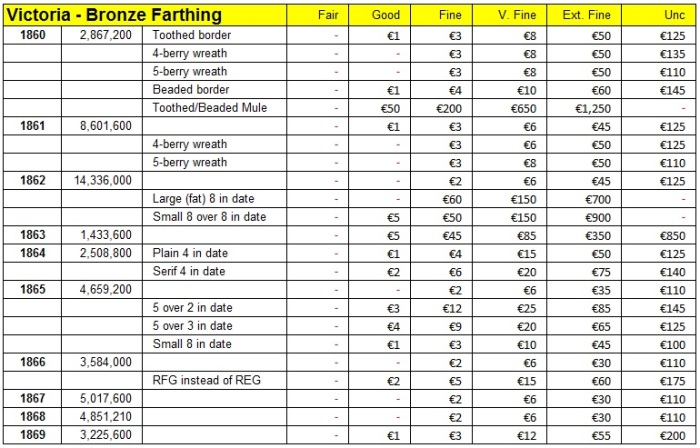 During the 1870s, the Royal Mint was under such pressure to produce coinage that they took the unprecedented step of ordering blanks from the privately-owned and run Heaton Mint in Birmingham. In 1874, 1875 and 1876, they went further – the Royal Mint sub-contracted some, or all of the production of GB & Ireland bronze farthings to the Heaton Mint. These coins had an H under the date. Those without an H were minted in London by the Royal Mint – possibly using Heaton blanks – but there are no records to say how many. The Heaton Mint seems to have encountered similar ‘die problems’ to that of the Royal and, once again, there are man die varieties, repairs, re-cuts, etc. to study and collect.

The berries are similar to those illustrated in the previous section.

Other varieties for this decade include:

During the 1880’s, similar die varieties occurred as the Royal Mint struggled to produce replacement coins, along with a “mint mark to the left” variety from the Heaton Mint. By 1883, they seemed to have got things right and no major die varieties exist for the rest of that decade.

The 1890s also has a few scarce varieties and high premiums are paid for the better grades. Once again, it is always worth checking carefully because many dealers do not check for these small die variations.

1897 GB & Ireland bronze farthing (Victoria, Widow Head) – high & low tide varieties. The ‘high tide’ (on the left) is the scarcer of the two.

In 1897, in response to complaints from the public and shopkeepers, the Royal Mint began to chemically stain their farthings a darker colour in order to prevent people confusing a bronze farthing (¼d) with a gold half-sovereign – a coin worth 480-times more than a farthing !

The high and low tide marks vary between Victorian farthings, halfpennies and pennies so it is important that collectors compare like with like – due diligence usually pays handsomely when the scarcer variety is successfully identified.