Gibbons & Williams was one of the last private banks to be founded in Ireland. Founded in 1833, it spectacularly collapsed in 1835 when the senior partner, Hutchins Thomas Williams, was found to have been embezzling client funds. 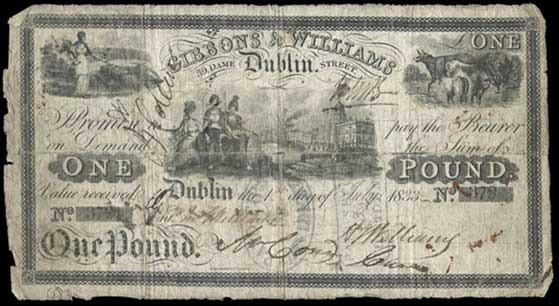 Gibbons & Williams one pound promissory note, 39 Dame Street, Dublin and payable in both Dublin. Dated 1st July 1833, serial number: 378. This is a well-circulated note, with horizontal and vertical creases, plus damage around the edges. , otherwise very good (VG).