The history of mining at Ross Island in Killarney, Co Kerry, can be traced back to the Bronze Age, where several ancient metal finds from Killarney point to a significant Early Bronze Age settlement in the area.

The Bronze Age work camp at Ross Island provides an insight into daily life in an early copper mine. The foundation traces of huts used by the miners have been identified, consisting of circular and sub-rectangular settings of stake-holes where walls once stood. Excavations revealed animal bones, mostly of cattle and pig with some sheep, discarded by the miners after their meals. A small quantity of worked bone was found, as were flint artifacts including arrowheads and scrapers. Sherds of small pottery vessels used as drinking cups by the miners were also recovered.

It is not certain whether the operations here were organised on a seasonal basis or involved a longer commitment by full-time miners. The domesticated animal bones point to an agricultural base behind this mining. The location of these parent settlements remains unknown.

A large metalworking complex using metal ores from Ross Island has also been identified at Scrahane in Killarney. These archaeological discoveries suggest that Killarney was a major source of copper and possibly other metals in the early Christian era.

A Welsh monk, Nennius, is quoted as saying that ‘the mineral wealth of Killarney as a wonder of the known world.’ The lines below were written around 800 AD:

‘There is a lake called Lough Lein. Four circles are around it. In the first circle, it is surrounded by tin, in the second by lead, in the third by iron and in the fourth by copper…’

Archaeological excavations at Ross Island uncovered evidence of metal production in the early Christian period, in the form of small furnaces dated to around AD 700. This period saw extensive enclosed settlement (‘ringforts’) around Killarney and the establishment of an important monastic centre on the island of Innisfallen, Lough Leane.

The earliest record of industrial mining on the Kenmare estate dates to 1707 when John Asgill raised four ton of lead ore on Ross Island. In 1726, Joseph Bacon of Castlelough obtained a 21 year agreement to work this mine, with little apparent success as the lease was surrendered in 1731. The next phase of mining here dates to 1754 when Thomas Herbert came to an arrangement with the Kenmare family.

Records point to management difficulties at this time, and to problems caused by lake flooding and careless mining. Finally, mining under the direction of one Barnoff is recorded at Ross Island in 1785, however there are no details.

Other mining attempts in this period include the discovery in 1761 of a metallic bed containing lead ore on the Herbert lands at Cahirnane. A trial shaft was sunk and one ton of ore raised. The Herberts extended this trial in 1794 under the direction of Rudolf Raspe, wasting a great deal of money on what became known as the ‘Copper Folly’. Lead ore was also discovered at Coolclogher near the river Flesk, but not in sufficient quantity to mine.

There are two distinct types of notes issued by the Ross Island Mine: 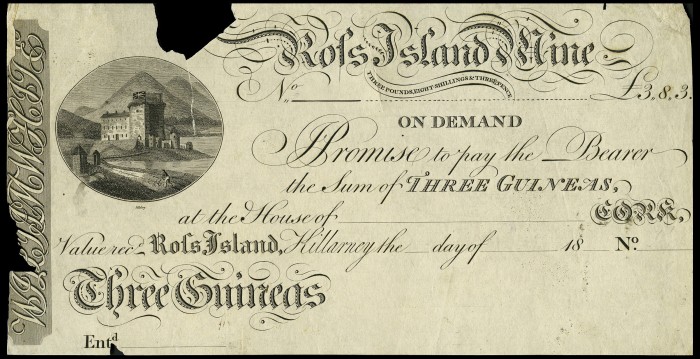 The banknote above was put up for auction by Dix Noonan & Webb in London in 2008. It was estimated at GB£600 but did not reach its reserve price. Unsold.

The most important phase of industrial mining at Ross Island began with the arrival of Colonel Robert Hall to this area in the early 1800s. With 13 partners, he established the Ross Island Company and obtained a 31 year mining lease from Lord Kenmare for a one eight royalty of ore raised.

This first phase of mining ended around 1810 due to financial problems, however the Ross Island Company continued operations for another four years. In 1811, Lord Kenmare granted a new lease to the mine to Captain William White.

Map of Ross Island Mine – Buildings 1829

The size of the workforce at Ross Island rose from 150 to around 500 at different times between 1804-10, making an important contribution to the local economy. The mining expertise was provided by Wicklow, Cornish and Welsh miners, who worked with labourers drawn from the Killarney area, under the direction of the manager William White.

Colonel Robert Hall was a pioneer of metal mining in the south of Ireland in the early 19th century. He arrived in Ireland in 1795 in command of a regiment which included many Cornish miners. Hall opened several copper mines in Munster between 1802-23, at a time when there was a growing demand for copper during the Industrial Revolution.

By the end of the 18th C the White family held most of the land in Bantry and the Beara Pennisula, becoming the largest landowners in this part of Cork. In 1796 Richard White was instrumental in alerting the English Army Headquarters in Cork to the appearance of French ships in Bantry Bay.

In 1801 the title Baron Bantry was advanced to Viscount and in 1815 Richard White assumed the title Earl of Bantry. Richard married Margaret Anne Hare, daughter of the 1st Earl of Listowel in 1799. It was his son who, while still Viscount Berehaven, laid the plans for the magnificent house and gardens extant today. The White family throughout the 19th C inter-married with other well known landed families including the Herberts of Muckross House, Killarney and the Guinness family of Dublin.

Captain William White was a member of this Anglo-Irish family and he took over the Ross Island Mine in 1811, when he was granted a new lease for the mine by Lord Kenmare. He tried to develop the mine over the following two years before finally abandoning it in 1814.