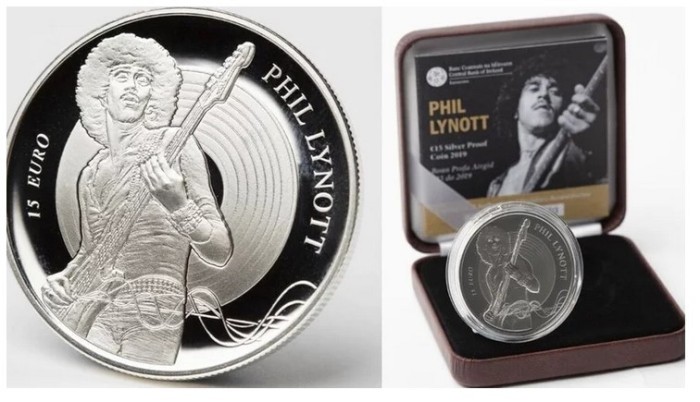 This is the second coin issued in the three coin series entitled ‘Modern Irish Musicians’ and it commemorates 70 years since the year of birth of legendary Irish rock musician Phil Lynott. Such is his popularity and cult rock status, his coin was ‘sold out’ within two hours and the Central Bank’s specialist website (www.collectorcoins.ie) crashed due to a massive surge in website traffic). A petition was launched to force the Central Bank of Ireland to issue more coins but, sadly, this cannot be done since it is already ‘certified’ as a limited edition of 3,000 coins.

Phil Lynott was born in the West Midlands of England but grew up in Dublin. After fronting several bands (incl. Skid Row, alongside Gary Moore), Lynott formed Thin Lizzy in 1970. The band first found success with ‘Whiskey in the Jar’, followed by several hits in the mid-70s with songs such as ‘The Boys are Back in Town’, Jailbreak’, ‘The Rocker’ and ‘Waiting for an Alibi’.