The first locally produced Irish coinage was the so-called Hiberno-Norse coinage which was first minted in Dublin in about 995-7 AD under the authority of Sihtric III (aka Sihtric Silkenbeard), the Norse King of Dublin.  There is no evidence for the native Irish producing coins before this, so it is likely that their economy was not coin-based.  The Brehon Laws give examples of payments and compensation via services, indenture and/or property but they do not mention units of currency for economic transactions.

Historical evidence (from the annals) for native Irish and contemporary Viking  ‘forms of payment’ include the following :-

Why were Viking coins produced ?

The Vikings were raiders and traders – and the ‘trading’ Vikings needed units of ‘acceptable’ currency for trading. They traded with many different tribes and cultures, some of which had coins, e.g. the Arabic dirham was widely traded at the time, as were the Anglo-Saxon and Carolingian pennies.

A problem arose with these ‘foreign’ coins insofar as the Arabic dirhams fluctuated from 95% silver (before 950 AD) to around 60% silver by the end of the 10th C (Steuer, 2002, 154-55).  On the other hand, German and English coins remained stable at approx. 90% silver (Steuer 2002, 146; Zwicker et al. 1991).  Hack silver in the form of foreign coins was difficult to value, and the hack silver itself was of such different shapes, sizes and weights, it was also difficult to value.

How did the Vikings progress from a ‘bullion’ economy to a domestic ‘coin-based’ economy?

a) The ‘linear’ model for Viking‐age economies whereby the status economy is replaced by a bullion economy, and then a coin‐based economy, with some overlap in each transition. 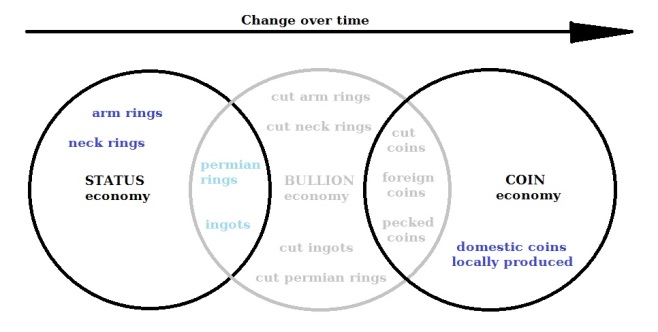 A linear model for Viking‐age economies

This linear model for the development of Viking-age economies proposes that:

b) The ‘simultaneous’ model for Viking‐age economies, in which different economies co-exist and are used for different social and economic functions, with some overlap in these functions. 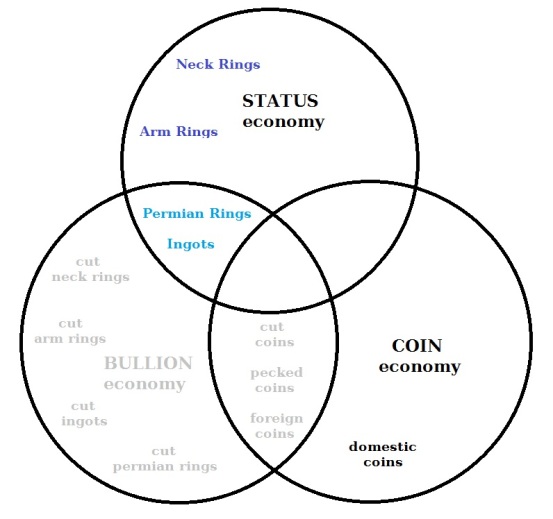 A simultaneous model for Viking‐age economies

This model does not represent a linear development from a status to a coin-based economy.  As with the linear model, finds of ornaments such as arm rings or neck rings show the presence of a status economy.

Why were Viking coins produced in Dublin ?

The Vikings were already producing silver coins in their other Scandinavian colonies such as York, so perhaps the need for money as a means of doing business (trade) with neighbouring Anglo-Saxon kingdoms was a good reason for doing so.  Since many of the Viking kings of York were also kings of Dublin, it was inevitable that Dublin would eventually produce its own coinage in order to grow via overseas trade.  Anglo-Scandinavian coins were also being produced in Sweden and Denmark, presumably also to facilitate trade with the Anglo-Saxons – or was it just an emotive connection to the danegeld formerly paid by the English to halt Viking raids on their kingdoms.

The three Dublin hoards of the earlier 990s have brought a dramatic revelation that there already existed an effective coin economy based on imported Anglo-Saxon coins.  This helps one understand how Sihtric ‘Silkbeard’ could introduce so effectively a new currency based on his own local coinage.

What happened after Sihtric?

The Hiberno-Norse coinage quickly degraded to crude copies of the ‘long cross’ type of Aethelred and by about 1030 AD they contain minimal legends of vertical strokes instead of letters.  During the following 100 years the coins became increasingly crude though for the most part still recognisably inheriting their design from the ‘long cross’ coinage.

It should also be remembered that in 1066, the Normans invaded England and quickly displaced all local chieftains with local feudal lords who were given ownership of the land and peasants within its boundaries – provided they could keep it by force of arms !

From a numismatic point of view, Hiberno-Norse coinage is divided into 7 phases.

The Earliest coinage of Ireland comprises an issue of silver pennies under the authority of Sihtric III (a.k.a. Sihtric Silkenbeard) King of Dublin.  These pennies follow the style of the contemporary pennies of Aethelred II of England, which changed their design every six years or so.

Phase I can be further divided into the following :-

Sihtric III died in 1029 and was succeeded by his son Anlaf Sihtricsson. There is a recently discovered coin (of very good quality) that is in the style of Cnut’s “Pointed Helmet” issue (1024-1030) that carries the name Anlaf and does appear to be a late Phase I Hiberno-Norse coin.

The discovery of this coin presents Irish numismatics with few chronological and classification problems, specifically

The late Mark Blackburn suggested that some of the Hiberno-Norse coins of the later Phase I types were made in Anglo-Saxon mints on behalf of the Dublin authorities, which would be likely explanation of how the later Phase I pieces are from such well executed dies.

Following the end of minting of coins in direct imitation of the contemporary English issue, the mint in Dublin appears to have reverted to minting coins in imitation of the Long Cross issue of Aethelred II in about 1020 AD. 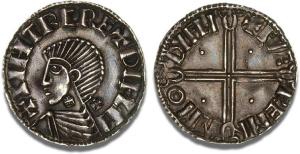 This is the most common type of Hiberno-Norse coinage and is often seen at auction and in dealers’ inventories.  The Dublin Vikings were in decline after the Battle of Clontarf and, by 1035 AD, the coinage minted in Dublin had degraded to a point where it is likely that it was only being produced for internal use within Ireland as it had fallen below the standards used in any neighbouring regions.

Phase III was also a renewal of the weight of the coinage from a low of c.0.65g at the end of Phase II to around 1.05g at the beginning of Phase III. A break with directly imitating the English series ended in Phase II and, since Phase III is such a long time period (1035-1060), it is reasonable to question the comparatively long time frame of Phase III.

Evidence for a date as late as this is provided by excavations at Christchurch Place where a Group G coin has been found in a building dendrochronologically dated to c. 1059.

The so-called ‘scratched die’ coins of Phase IV comprise a small group that could have been included with the following phase.

The fifth phase of Hiberno-Norse coins has been referred to “a bit of a dumping ground” by some but this merely reflects the need for more effort to study them as a group and devise a series of categories via imagery, iconography and die linking. These pennies vary widely in design and, based upon their general style, production quality and weight, numismatic researchers broadly agree that they were produced in a period of approximately 40 years between 1060 and 1100 AD. 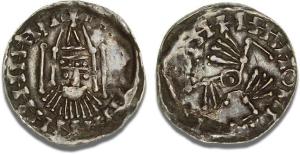 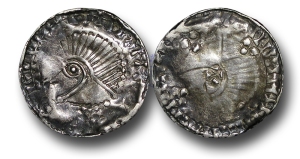 By about 1100 the Hiberno-Norse coinage settled down into a period of relative stability and a large number of coins of a relatively similar design were produced.

The Hiberno-Norse series died out sometime between 1130 and 1150 AD with a series of increasingly thin, under-weight and simplistic coins. The silver content had also become so debased that some numismatic researchers refer to them as a copper coinage.

This blog post will be followed up with a series of 7 more detailed posts, each one dealing with a single Hiberno-Norse phase.

Each of the above posts will be illustrated (as far as possible) with examples from each Phase and sub-Class of coinage.

Bornholdt Collins, K., “The 1999 Dunmore Cave (2) hoard (c.965) and the role of coins in the tenth-century Hiberno-Scandinavian economy”

Dolley, R. H. M., “A note on the find-spots and probable composition of two Viking-Age coin-hoards frmo the County Offaly”, Bulletin of the Numismatic Society of Ireland 5, (1962), 1-4

National Museum of Ireland, “A Viking Weight found in Ireland – a precursor to coin weights?”