The sixpence (6d) (Irish: reul) coin was a sub-division of the pre-decimal Irish pound, worth 1/40 of a pound or ½ of a shilling.  It ‘nickname’ was a ‘tanner’ and it is thought that this is from John Sigismund Tanner, originally from Saxe-Coburg, who was a medallist and designer at the Royal Mint.  The sixpence he designed for George II popularly gained his name and this stuck for all the other designs right up until decimalisaton.

In 1927 a competition was run by the Irish Government to design new coins and entries were put forward by several renowned artists, sculptors and designers of the day, including :-

Apart from the plaster models, Manship also had one of each coin struck as a pattern in bronze.  Each Manship pattern is unique and Manship donated them to the Metropolitan Museum of Art in 1929, the year Metcalfe’s designed coins were released. He also donated his studio set of the eight plaster models to the Smithsonian Art Museum (among other studio models) in 1965 a year before his death.

The Morbiducci ‘die struck’ patterns are extremely rare and some are in the hands of private collectors.  When they appear at auction, they usually command a very high premium and are subject to frenzied bidding.

The 1927 competition was won by English artist Percy Metcalfe and his modified design of an Irish Wolfhound is illustrated above.

The obverse featured the Irish harp. From 1928 to 1937 the date was split either side of the harp with the name Saorstát Éireann circling around. 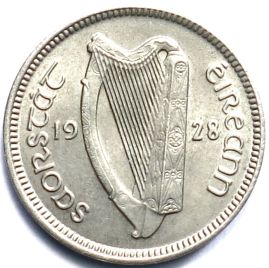 Struck in nickel and, like the threepence coin, and was very well wearing – thus making the ‘higher grades’ difficult to assess.  Later issues, in cupro-nickel are not so hard-wearing and are difficult to find in the higher grades.

The metal was changed to cupro-nickel in 1942 as nickel increased in value; this coin, which consisted of 75% copper and 25% nickel, was not as well-wearing.

During the run up to decimalisation, it was expected that the sixpence (or a re-named decimal equivalent) would circulate alongside the new decimal coins, with a value of 2½ new pence in Ireland and in the United Kingdom.