This series of notes is known as “Series C” and the designs are the output from a limited competition held in 1991 in which nine Irish artists were invited – the winner was Robert Ballagh. This series of notes had denominations of £5, £10, £20, £50 and £100 – with no pound note, since there a coin of this value circulating since 1990. The £20 was the first to be issued, following widespread forgery of the Series B (W.B. Yeats) £20 note.  The theme for this series was people who contributed to the formation of a modern Ireland, and features politicians, a language, literary and religious figures. 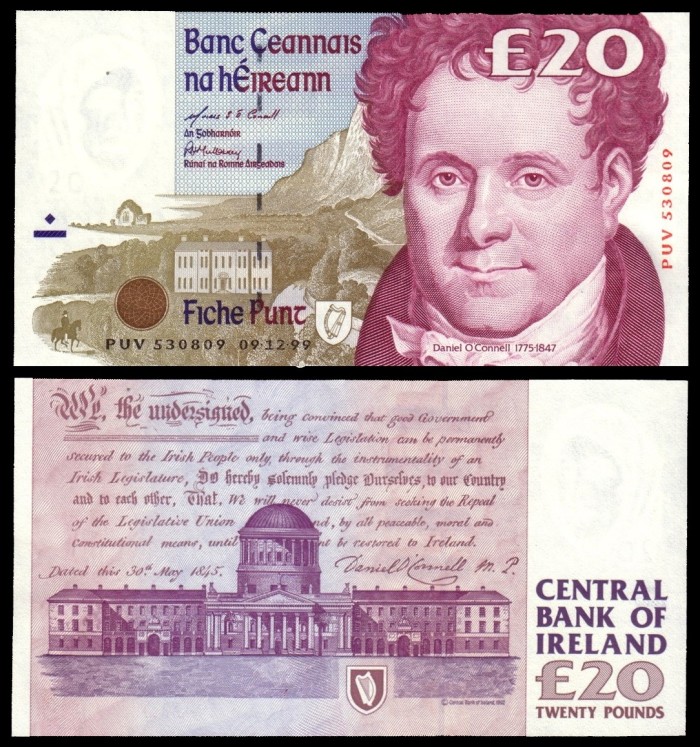 1999 C Series £20 Banknote, featuring Daniel O’Connell – considered one of Ireland’s greatest statesmen and he exerted great influence on the relations between the Irish people and their English rulers in the first half of the 19th century. He was able to rally the Irish people, agitate for some degree of civil rights in Ireland, and was widely revered by the common people in Ireland.

Who was Daniel O’Connell?

Daniel O’Connell was born on 6th August 1775, in Co Kerry, in the southwest of Ireland.  Although his family were Roman Catholics, they were considered members of the gentry and they owned land.  The family practiced an ancient tradition of “fosterage” whereby a child of wealthy parents would be raised in the household of a peasant family. This was said to make the child deal with hardships, and other advantages would be that the child learn the Irish language as well as local traditions and folklore practices.

In his later youth, an uncle nicknamed “Hunting Cap” O’Connell doted on young Daniel, and often took him hunting in the rough hills of Kerry. The hunters used hounds, but as the landscape was too rough for horses, the men and boys would have to run after the hounds.  The sport was rough and could be dangerous, but young O’Connell loved it.

Following classes taught by a local priest in Kerry, O’Connell was sent to a Catholic school in the city of Cork for two years.  As a Catholic, he couldn’t enter the universities in England or Ireland at the time, so his family sent him and his younger brother Maurice to France for further studies.  While in France, the French Revolution broke out.  In 1793 O’Connell and his brother were forced to flee the violence.  They made their way to London safely, but with little more than the clothes on their backs.

The passing of Catholic Relief Acts in Ireland made it possible for O’Connell to study for the bar, and in the mid-1790s he studied at schools in London and Dublin.  In 1798 O’Connell was admitted to the Irish bar.

While a student, O’Connell read widely and absorbed current ideas of the Enlightenment, including such authors as Voltaire, Rousseau, and Thomas Paine.  He later became friendly with the English philosopher Jeremy Bentham, an eccentric character known for advocating a philosophy of “utilitarianism.”  While O’Connell remained a Catholic for the rest of his life, he also always thought of himself as a radical and a reformer.  He was also a Freemason but left the organisation in

A revolutionary fervour was sweeping Ireland in the late 1790s, and Irish intellectuals such as Wolfe Tone were dealing with the French in hopes that French involvement could lead to Ireland’s liberation from England.  O’Connell, however, having escaped from France, was not inclined to align himself with groups seeking French aid since he had seen the excesses of the French Revolution at first hand.

When the Irish countryside erupted in rebellions in the spring and summer of 1798, O’Connell was not directly involved.  His allegiance was actually to the side of law and order, so in that sense he sided with British rule.  However, he later said that he wasn’t approving of the British rule of Ireland, but he felt that open revolt would be disastrous.

The 1798 uprising was particularly bloody, and the butchery in Ireland (on both sides) hardened his opposition to violent revolution.  Having witnessed the carnage of the French Revolution, O’Connell’s Irish experience merely reinforced his fear of what might happen in the political vacuum of the aftermath.

Marrying a distant cousin in July 1802, O’Connell soon had a young family to support. And though his law practice was successful and constantly growing, he was also always in debt. As O’Connell became one of the most successful lawyers in Ireland, and was known for winning cases with his sharp wit and extensive knowledge of the law.

A duel fought by O’Connell always filled him with remorse, yet it added to his political stature.  Some of O’Connell’s political enemies suspected he was a coward as he had challenged another lawyer to a duel in 1813, but shots had never been fired.

In a speech O’Connell gave in January 1815 as part of his Catholic Emancipation movement, he referred to the Dublin city government as “beggarly.”  A minor political figure on the Protestant side, John Norcott D’Esterre, interpreted the remark as a personal insult, and began to challenge O’Connell.  D’Esterre was a captain of the Royal Marines, placed on half-pay in 1810 and became a provision merchant to Dublin Castle.  He also had a deadly reputation as a duellist.

O’Connell, when warned that duelling was illegal, stated that he would not be the aggressor, yet he would defend his honour. D’Esterre’s challenges continued, and he and O’Connell, along with their seconds, met at a duelling ground in Bishop’s Court Demesne, Co Kildare. 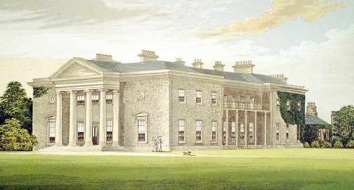 As the two men fired their first shot, O’Connell’s shot struck D’Esterre in the hip.  It was first believed that D’Esterre had been slightly wounded.  But after he was carried to his house and examined by doctors it was discovered that the shot had entered his abdomen. D’Esterre died two days later.

O’Connell was deeply shaken by having killed his opponent.  It was said that O’Connell, for the rest of his life, would wrap his right hand in a handkerchief when entering a Catholic church, for he didn’t want the hand that had killed a man to offend God.  Less well known is the fact that O’Connell paid an annuity to his adversary’s widow, Jane Lucretia D’Esterre, to support herself and her child.  Lady Jane later went on to marry John Grattan Guinness (1783–1850), Arthur’s youngest son, who was an officer in the East India Company army.

Despite feeling genuine remorse, O’Connell’s refusal to back down in the face of an insult from a Protestant antagonist increased his stature politically.  Daniel O’Connell became the dominant political figure in Ireland in the early 19th century, and there’s no doubt that his bravery in facing D’Esterre enhanced his image.

O’Connell as a Freemason

In 1826, the papal Bull of Leo XII against secret societies was widely promulgated in Ireland unlike the previous bulls issued against Freemasonry in the 18th century.  Catholic members of the Order were threatened with excommunication if they failed to resign from their Lodges.  One of the most prominent figures in Irish history to have been a Freemason, Daniel O’Connell (Past Master, Masonic Lodge No. 189, Dublin), resigned after pressure was put on him by Archbishop Troy of Dublin.

In 1828, O’Connell ran for a seat in the British Parliament as the member from County Clare, Ireland.  This was controversial as he would be barred from taking his seat if he won, as he was Catholic and Members of Parliament were required to take a Protestant oath.

O’Connell, with the support of poor tenant farmers who often walked miles to vote for him, won the election.  As a Catholic Emancipation bill had recently passed, due in large measure to agitation from the Catholic Association, O’Connell was eventually able to take his seat.

As might be expected, O’Connell was a reformer in Parliament, and some called him by the nickname, “The Agitator”.  His great goal was to repeal the Act of Union, the 1801 law which had dissolved the Irish Parliament and united Ireland with Great Britain.  Much to his despair, he was never able to see “Repeal” become a reality. 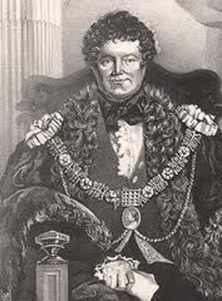 The Municipal Reform Act of 1840 broke the traditional Protestant stranglehold on Dublin Corporation and O’Connell, after a tough campaign, was duly elected to Dublin Corporation in 1841 and became the first Catholic Lord Mayor of Dublin since 1690.  With a huge Tory majority at Westminster, O’Connell decided to embrace new development in local Irish politics, including taking an interest in the temperence crusade of Fr Matthew – to the point of becoming an ardent teetotaller himself, writing articles in newspapers praising abstinence and fundraising for the new cause..

In 1843, O’Connell mounted a great campaign for Repeal of the Act of Union, and held enormous gatherings, called “Monster Meetings,” across Ireland.  Some of the rallies drew crowds of up to 100,000 people.  The British authorities, of course, were greatly alarmed.

In October 1843 O’Connell planned a huge meeting in Dublin, which British troops were ordered to suppress.  With his aversion to violence, O’Connell cancelled the meeting.  Not only did he lose prestige with some followers, but the authorities arrested and jailed him for conspiracy against the government.

O’Connell returned to his seat in Parliament just as the potato famine ravaged Ireland.  He gave a speech in the House of Commons urging aid for Ireland, and was mocked by the British.

In poor health, O’Connell travelled to Europe in hopes of recuperating, and while en route to Rome he died in Genoa, Italy on 17th May 1847 – the height of the famine in Ireland.

“The altar of liberty totters when it is cemented only with blood.”

“Gentlemen, you may soon have the alternative to live as slaves or die as free men.”

“Good God, what a brute man becomes when ignorant and oppressed.  Oh Liberty!  What horrors are committed in thy name!  May every virtuous revolutionist remember the horrors of Wexford!”

“My days—the blossom of my youth and the flower of my manhood—have been darkened by the dreariness of servitude. In this my native land—in the land of my sires—I am degraded without fault as an alien and an outcast.”

“There is an utter ignorance of, and indifference to, our sufferings and privations…  What care they for us, provided we be submissive, pay the taxes, furnish recruits for the Army and Navy and bless the masters who either despise or oppress or combine both?  The apathy that exists respecting Ireland is worse than the national antipathy they bear us.”

“No person knows better than you do that the domination of England is the sole and blighting curse of this country.  It is the incubus that sits on our energies, stops the pulsation of the nation’s heart and leaves to Ireland not gay vitality but horrid the convulsions of a troubled dream.”

“The poor old Duke [of Wellington]!  What shall I say of him?  To be sure he was born in Ireland, but being born in a stable does not make a man a horse.”

“Ireland is too poor for a poor law.”