The other Hiberno-Norse towns in Ireland became urban later than Dublin: a base was established in Limerick in the 830s/840s, the initial Norse settlement seems to have been established in the 920s but …

These towns had their own rural hinterlands, later known as “the Cantreds of the Ostmen” and these areas surrounded Waterford, Cork, Limerick and Wexford.

The Hiberno-Norse minted their own coins in the Danelaw almost 80 years before Sihtric III Anlafsson (Silkenbeard) did in Dublin. They held the kingship of Northumbria and York and coins were minted there by the Hiberno-Norse kings. At one stage, York was a client kingdom subservient to Dublin. This brought trade between the two, along with power and wealth and, when Hiberno-Norse power was broken in Northumbria, Dublin became the focal point for their trade and a recognisable local coinage was eventually introduced in Dublin from 995 AD onwards. were .

Dublin thus had a healthy head start on the other Irish settlements. It became a town earlier than the others and was much more powerful in terms of its commercial and military fleets. 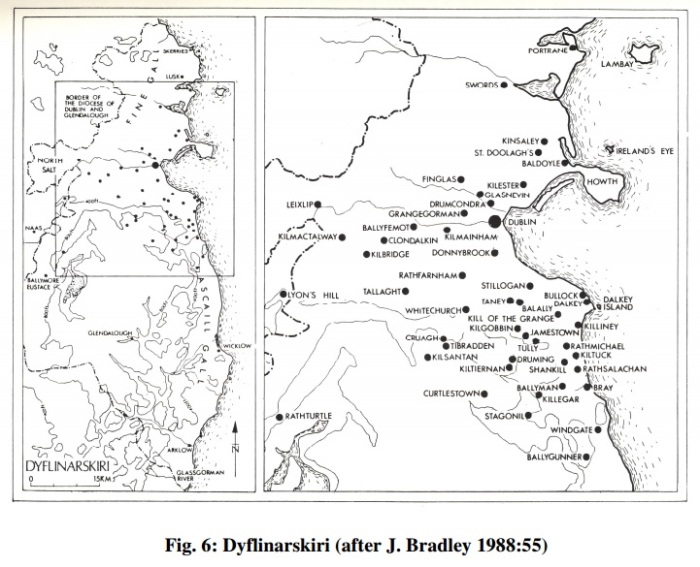 Dublin stood at the centre of a wide exchange network consisting of both long-distance and local trade: the town exported some manufactured goods like ringed pins, but raw materials like agricultural products and slaves were more important (Valante 2000:69,81; Wallace 1987:202).

Surrounding Dublin was its immediate hinterland, called Dyflinarskiri in the later Scandinavian sources (see map above). In the 10th century this area probably included all of modern Co. Dublin and parts of Wicklow, north Wexford, Kildare and a strip of the coast between Arklow and the river Nanny. Fine Gall, the northern area under Dublin control stretched from the Liffey to north of Skerries, and corresponds to the northern part of today’s Co. Dublin.

Thus, Dublin had a much larger hinterland than the other Viking settlements and this created a larger local market, a larger population and a more lucrative market for international trade. Visiting overseas traders would, in turn, become a focal point and route for exports.

Inevitably, the need for a coin-based economy emerged and Sihtric used this opportunity to create a coinage in his own name (prestige) and took a percentage (profit) from the production of coins.

What is not certain, however, is whether or not later Hiberno-Norse coinages were produced in Dublin has been brought into doubt. For example, Phase III coins are thought to have been produced by Sihtric’s successors (Echmarcach mac Ragnaill and Ímar mac Arailt). Both men had two periods of power but the latter ended up as a vassal to Diarmait mac Máel na mBó (the Cattle Rustler), the King of Leinster.

Diarmait mac Máel na mBó went on to be a High King in all but name and even became an international player when he gave safe haven to the sons of the deposed King Harold after the Norman Invasion of 1066.

There is now some doubt as to precisely where the coinages of Phase 4, 5, 6 and 7 were produced.

While Sihtric was minting his own (Phase I) coins in Dublin, there were two major mints operating in Scandiavia. Like Sihtric, they were copying contemporary Anglo-Saxon coins.

In addition, there probably existed a mint in the realm of the Norwegian kings, Öläf Tryggvason and Ölåf Haraldsson. At that time, the Anglo-Saxon kingdom operated the most advanced monetary system in Western Europe, characterised by periodic re-coinages.

When the English moneyers finally left Sigtuna, the inscriptions became blurred and the style more ‘un-English’ as the Scandinavian die-cutters in Lund and Sigtuna developed their own independent styles.

Dublin was truly “the second city” of the Norse Vikings in the early 11th C.