The ‘three-halfpence’ was the smallest silver coin ever struck by the Royal Mint for circulation. It was worth ​11⁄2d (or ​1⁄160 of a pound) and was produced for circulation in the British colonies, specifically for use in British Guiana, Ceylon (now Sri Lanka), Mauritius, Sierra Leone and the West Indies.

This monetary equivalence was no coincidence.

The United Kingdom had adopted a very successful gold standard in 1821, and so the year 1825 was an opportune time to introduce the British sterling coinage into all the British colonies. An imperial order-in-council was passed in that year for the purposes of facilitating this aim by making sterling coinage legal tender in the colonies at the specified rating of $1 = 4s 4d (one Spanish silver dollar to 4 shillings and 4 pence sterling).

As the sterling silver coins were attached to a gold standard, this exchange rate did not realistically represent the value of the silver in the Spanish dollars as compared to the value of the gold in the British gold sovereign, and as such, the order-in-council had the reverse effect in many colonies.

In 1834, silver coins of threepence (3d) and three halfpence (1½d) were introduced, valued at ½ real and ¼ real. The three halfpence coins came to be called “quartiles” or “quatties.” These in particular were used in church collections due to a feeling by the black population that copper coins were inappropriate for that purpose. Hence, they came to be called “Christian quatties”.

In 1839 an act was passed by Parliament declaring that as of December 31, 1840, only British coinage would be legal tender in Jamaica, demonetizing all of the Spanish coins, with the exception of the gold doubloon which was valued at £3 4s.

The emancipation of the slaves in 1838 increased the need for coinage in Jamaica, particularly low denomination coins, but the freed slaves were still reluctant to use copper – the silver 1½d helped.

According to Museum Victoria, Jamaica (which inherited the archive and collection of the Melbourne Branch of the Royal Mint) …

“Small parcels to the value of 25 pounds worth of 1½d pieces were issued by the Royal Mint, London to private persons for use in various colonies including Jamaica. No record was kept of the ultimate destination of any particular parcel.”

The coin is considered to be part of the British coinage because it has no indication of what country it was minted for, being made in the same style as the other contemporary coins of the United Kingdom of Great Britain & Ireland. 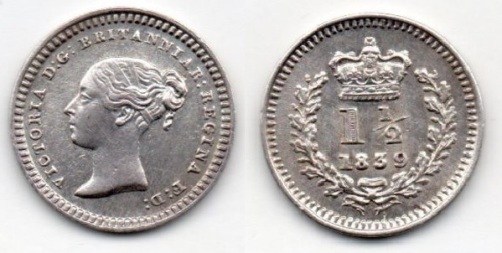