2019 Ireland – Special €2 commemorative coin (Centenary of the 1st Dáil Éireann). Apart from the Europe-wide coins that all states issue, this is only the second special commemorative €2 coin Ireland has issued on its own since 2002 – the previous one being the 2016 Easter Rising commemorative.

The First Sitting of Dáil Éireann in 1919:

The first sitting of Dáil Éireann took place in the Mansion House, Dublin on 21th January 1919. It followed the December 1918 election to the Parliament of the United Kingdom, where Sinn Féin won a landslide victory in Ireland and refused to take their seats in Westminster. Instead, 21st January 1919, they founded a separate parliament in Dublin called Dáil Éireann (“Assembly of Ireland”). 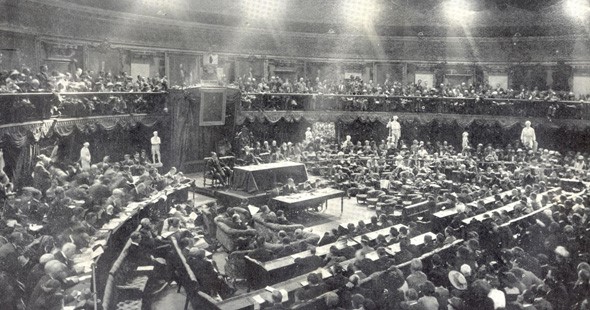 Earlier on the same that day, two RIC officers were shot dead in the Soloheadbeg ambush by IRA volunteers acting on their own initiative – symbolically the beginning of the Irish War of Independence 1919-1921. The conflict developed gradually from there.

Other Coins in this series: