Yes, you read that correctly. A massive €347,404,127 worth of old Irish banknotes and coins have yet to be handed in to the Central Bank of Ireland since the introduction of the Euro on 1st January 2002 – 18 years since the Euro Changeover!

To be absolutely precise, that’s:

That is a serious amount of spare cash ! 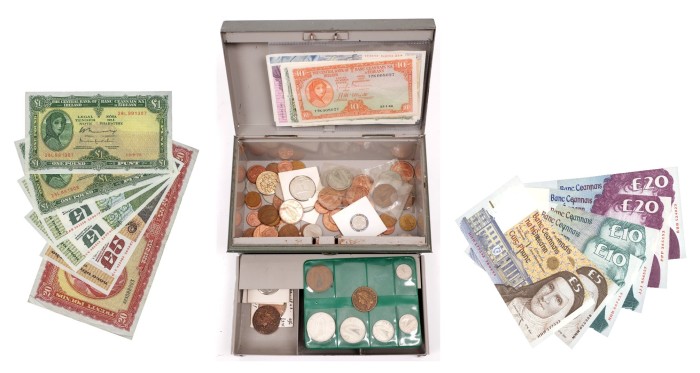 There is over €347.4 million worth of old Irish banknotes and coins missing!

The Central Bank of Ireland knows how much money they issued since the beginning of the Irish Pound in 1928 and they have accounted for every coin and banknote handed back into them. This includes:

There are many stories (and jokes) about the miserly Irish and some of them might even be true. Some people might say “that fella still has his Communion money” and there are many other anecdotes besides. According to the Census, there were 3,917,336 persons in Ireland on the night of 28 April 2002.

The reality is, apart from what’s held in private coin and banknote collections, that most of it is probably in bags, jars and biscuit tins sitting in attics, in wardrobes and under beds throughout the nation. Some people hoard things and that includes loose change. And, sometimes, they forget about them, or where they put them.

There are even some miserable, begrudging politicians in Dáil Éireann who think its all hoarded in the mattresses of wealthy farmers or under the floorboards of tax dodgers’ houses. That’s why one of them insisted the Central Bank of Ireland makes it difficult and time-consuming for people to exchange old cash nowadays.

Which Irish Coins are Rare?

Some old Irish coins are very rare indeed and some of them are also worth a small fortune. So, which ones should you look out for?

Errors and varieties are always worth more than the standard coin, so always be aware of unusual strikes, e.g. the wrong metal. I have begun to list these (see below).

What are old Irish Coins worth?

This is, of course, great news for collectors of Irish banknotes and coins because it means that there is still plenty of new material out there and, bit by bit, it will be found. Most of it is just ‘loose change’ and is only worth its face value – so long as the Central Bank of Ireland continues to exchange it for Euro.

Please remember, the most valuable coins tend to be the ones still in mint condition, i.e. uncirculated. This means they have never been used and are in perfect condition. Coins that have been used for many years and suffered lots of ‘wear & tear’ are seldom worth much. The exception to this rule is the rare dates listed above.